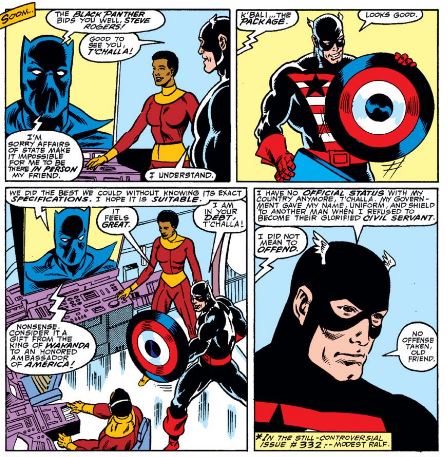 And at last, the Steve “The Captain” Rogers storyline hooks up with the John “Captain America” Walker storyline.  And for good measure, we get The Serpent Society too.  But first, Black Panther gives Steve a new shield to match his “Captain” color scheme.  (Remember, Tony Stark had given him one earlier he rejected it when Tony went nuts with the Armor Wars thing.)

After that, things move fast: There is a coup d’etat happening within the ranks of the Serpent Society, and Diamondback and Sidewinder have asked Cap for help—preferring the criminal justice system to execution at the hands of their former partners. 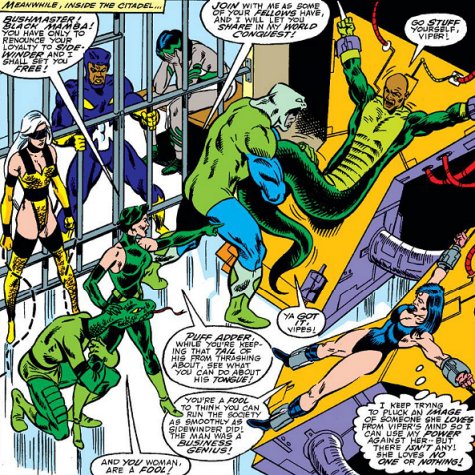 Cap and his crew invade Serpent Society’s base and find Hydra leader Viper is helming the revolt against the prior Society leadership.  Big battle time. 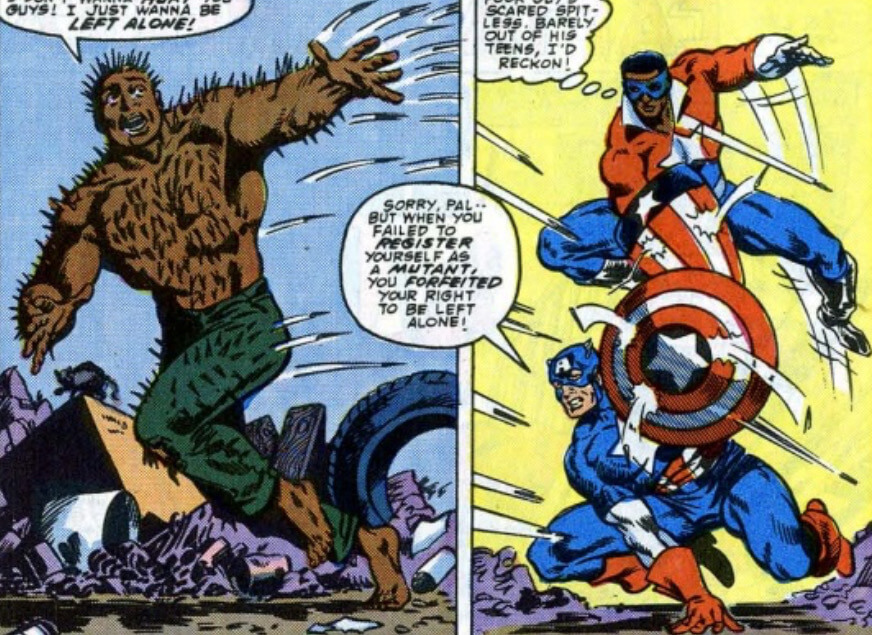 Meanwhile “Captain America” and Battlestar are enforcing the Mutant Registration Act against a newly identified mutant (who says he’s not a mutant) named Quill. 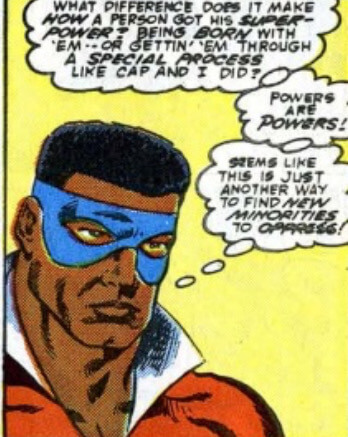 This leads to a somewhat lame attempt to humanize Battlestar.  Remember, before he became the new Cap, John Walker was essentially helping out white supremacists—and Lemar was right there with him.  He almost got lynched because of it.  It’s a little late for recriminations.

Quill is rescued by a new group called The Resistants

Meanwhile, a few of the Serpent Society (including Cobra) escaped the battle and are dumping venom into Washington, D.C.’s water supply.

Ronald Reagan turns into a snake, and calls Viper mommy. 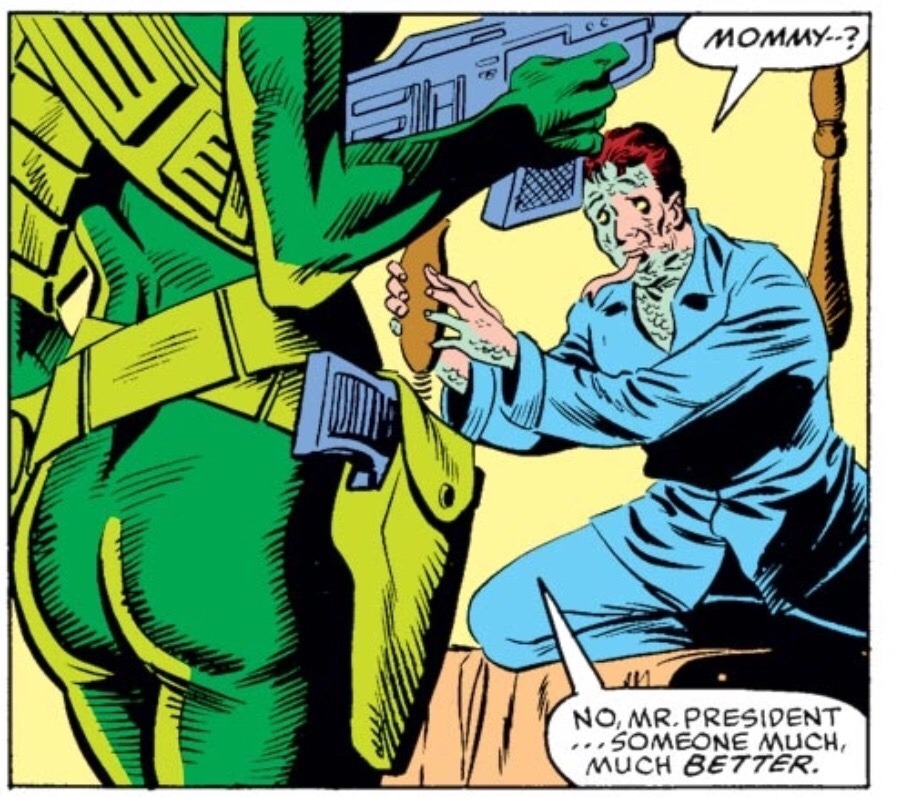 President Ronald Reagan gets turned into a snake monster.

I understood when The Leader wanted to turn everyone green with elongated heads, but I don’t get why the Serpent Society wants to turn people into snakes.  What’s the endgame with that? 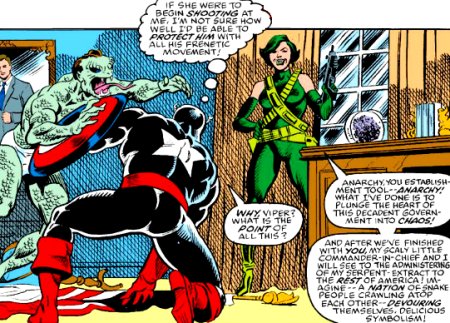 Cap and his crew catch up with the remaining Society members, and there’s another big battle.  And I guess we learn the motive in the poisoning: Anarchy.

And that’s what there is in the streets of DC.  There’s a bunch of great action as all the citizens are now snake people, fighting randomly while Cap and his crew rush to capture Viper and get the antidote.

At the same time, “Captain America” and Battlestar are also running down Serpent Society members and trying to contain the riots.

But first, The Captain has to fight Snake Reagan, who is armed with a flag. I’m sure this is meant to convey The Captain’s alienation from his own country, but there’s no “thought bubble” about it.

And the sidekicks meet and fight: 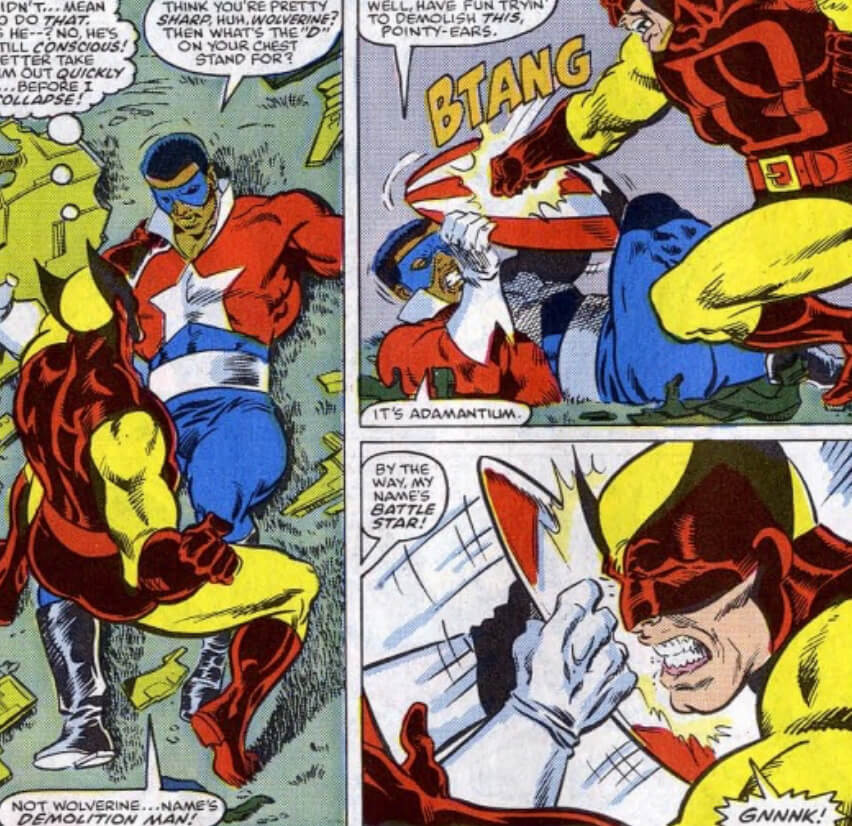 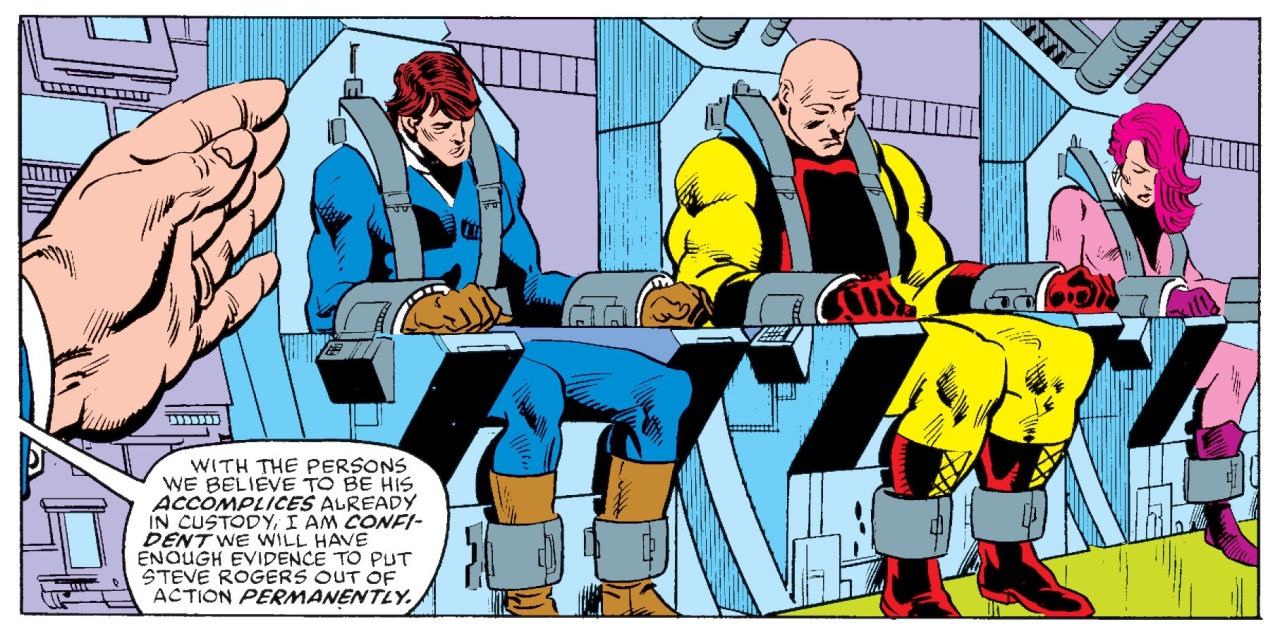 By the end of this story, both D-Man and Nomad have been caught (and everyone in DC is back to being not snakes).  And at the very end, a punch line: Reagan is “cured”…Or is he?  (Note the fangs.) “Cap” and Cap have yet to square off… 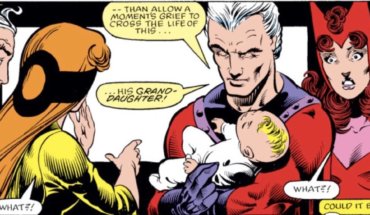 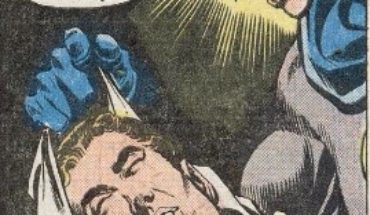 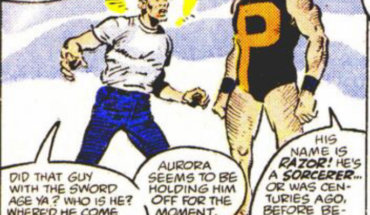