New Cap and his black Bucky who calls himself Battlestar. 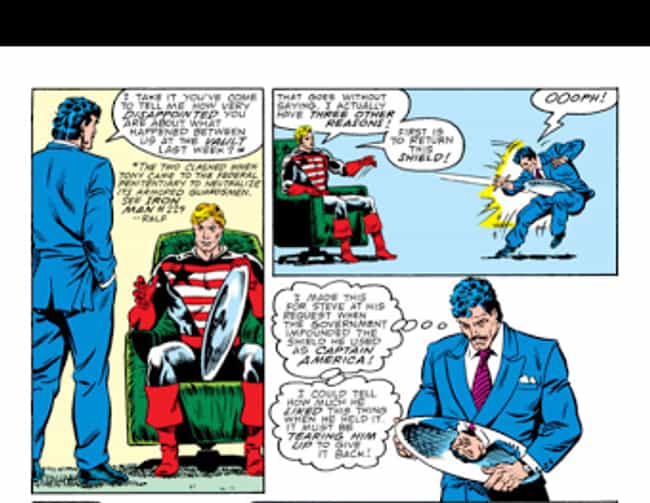 Meanwhile, Steve “The Captain” Rogers is still pissed at Tony Stark for enabling a prison break and just generally being a selfish dick in the whole Armor Wars storyline.  He returns the new shield Tony gave him, and then fights him.

Tony escapes, and Cap has to let him go because he’s not strong enough to defeat him without his shield.  But before Tony leaves, he makes a pretty badass threat:

(He should have fought him before he gave the shield back.)

And finally, something’s brewing with the Serpent Society.  They have some new members, but one of them, Fer-de-Lance, is actually working for Viper .  And there are some other infiltrators.  Basically, it’s a revolution.

At the end of this segment of the story, Diamondback calls the Captain America hotline for help–she can’t trust anyone in her own crew anymore, but she figures Cap will at least be honest with her, even if he doesn’t appreciate her being a criminal.  That’s a little weird.