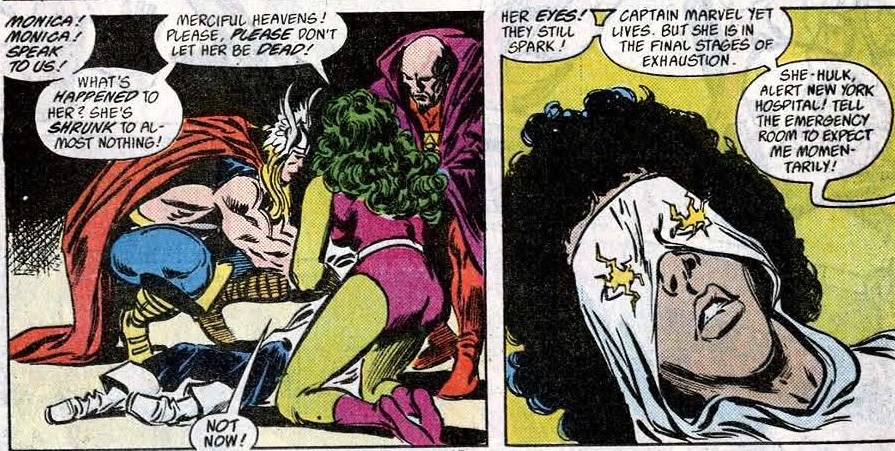 In the aftermath of last issue’s battle with Marrina, Captain Marvel is hospitalized and the team is left without a leader.  As we’ve seen in recent issues, a member of the “Kang Corps” has been astrally influencing Dr. Druid into wanting the leadership role, and he takes it in this arc.

He uses his magic to compel Black Knight to nominate him.

Meanwhile, the alternate Kang (called “Nebula”) gains increasing influence over Druid to the point where the doctor tries to prevent other Avengers from helping Thor in a battle, because the Nebula-Kang fears Thor is a threat to her ability to control the team via Dr. Druid.

This is why Walt Simonson is a legend.

Lots of folks have used the idea of multiple-timeline versions of the same character coming together–most notably, Hickman’s recent Fantastic Four run featuring all the Reed Richardses, but to me this one is the best.

The Kangs have come together to form an inter-reality corporation (they refer to themselves as executives, etc.) to try to form the reality they want by controlling and eliminating the pasts that they don’t.

Mr. Chairman Kang looks like one of the Three Musketeers, too,  Wonder if that was on purpose?

Throughout, She Hulk also gets mind-controlled into being a total traitorous bitch and, in the end, Dr. Druid and Nebula appear to “die” together.

Everyone is so messed up by the events that the team disbands.  I know, nobody really thinks the Avengers are broken up–especially so close to issue #300.  But Marvel has to play along with this for the next couple issues until we get a new lineup.

Nice Clark and Lois cameo, too.