Rick Jones and Hulk visit a computer hacker to try to hack into the military’s computers and see if they can find the experimental Gamma Bomb sites. 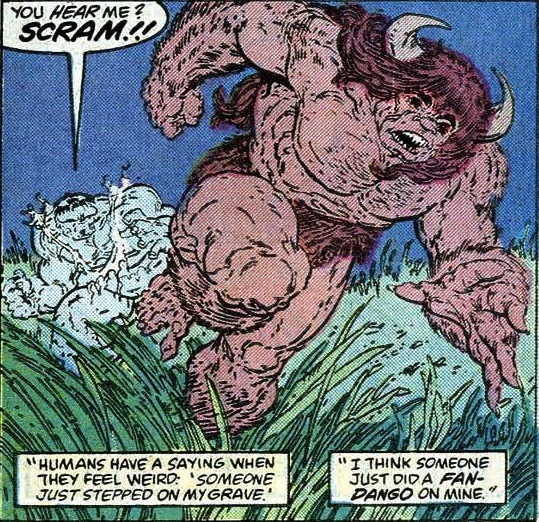 But first, the town where the hacker lives is being terrorized by Man-Bull, so Hulk has to take him out.  It’s not hard for him.

Then it’s finally time for the Half Life/Leader subplot to come to a boil.  After a funny check-in with Half-Life, who is trying to find the love of his life… …But instead kills a bystander.

Leader sends Half-Life on a mission to kill Hulk, knowing the gamma zombie will lose, but not caring.  (Love that joke above–a “grave” man.)

Leader even lets Half-Life attack at night, when he knows Hulk will be around (at this time in the series, he’s Hulk at night, Banner by day). 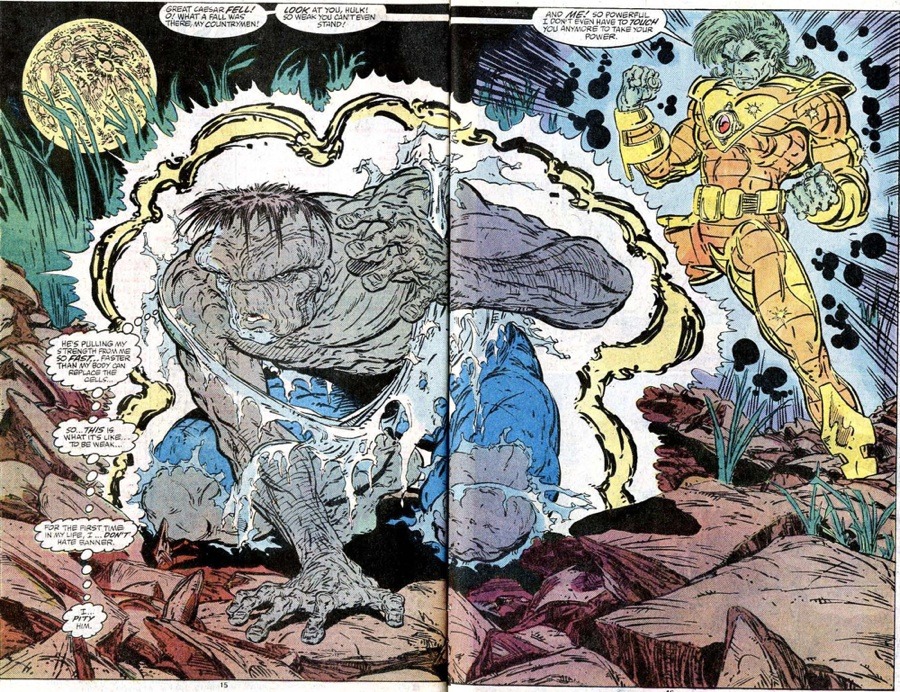 The fight’s good, but of course Hulk wins.

Also part of Leader’s plan is capturing Betty and the scientists working on the Gamma Bombs, after getting them kicked out of SHIELD by using mind control to have them violate Nick Fury’s orders. And, of course, he traps them in tubes.  See my “tubes tag” at the bottom of this post.

Leader turns the SHIELD agents into monsters, but lets Banner rescue Betty as part of his elaborate scheme to distract Hulk from protecting or competing for the gamma bombs. 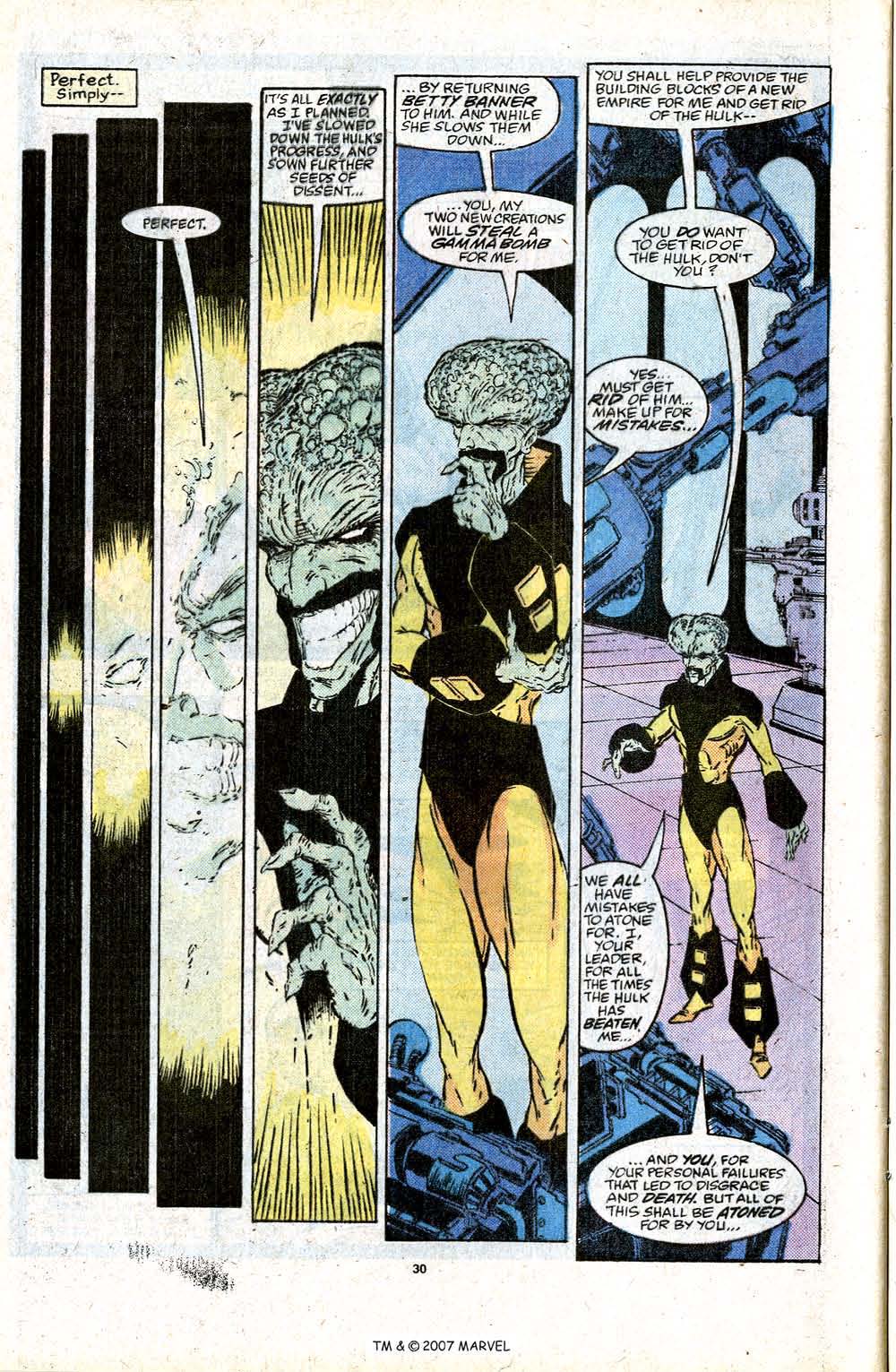 In a very well done character sequence, Betty tells Bruce she can’t love him because he’s incapable of feeling his own emotions (lest they make him Hulk out).  So, they agree she’ll wiat until nightfall and confront Hulk.

That conversation goes the opposite way, with Hulk rejecting her because she loves Banner.

Hulk tells her that he hates Banner, and because she loves Banner, he can never love her. But then, the characters seem to come to a common, complex understanding.  That hug scene is amazing.  This is the best-written Hulk comic so far.  I mean, of all Hulk books up to this point.  My summary here can’t do it justice.  You need to read this arc. 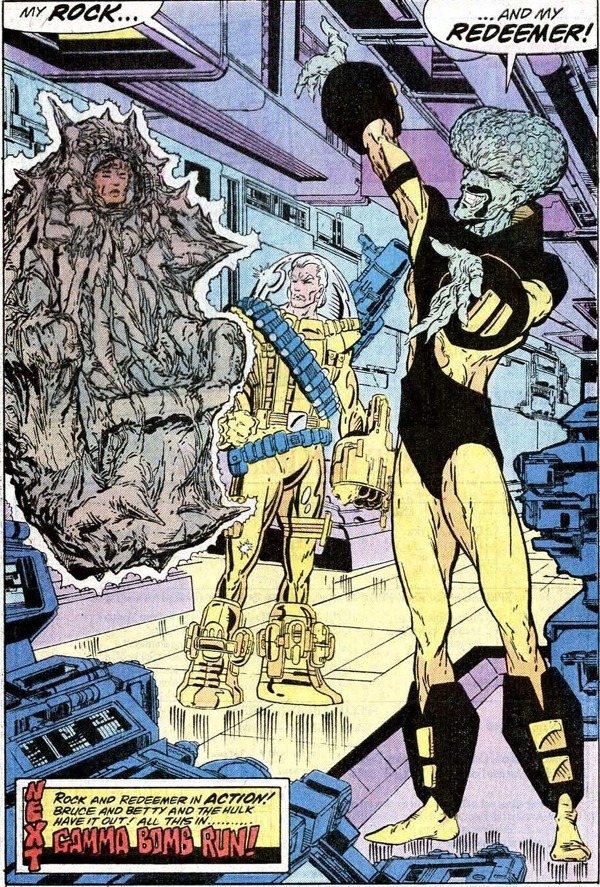 Anyway, after that it’s a double-size fight-for-the-bombs extravaganza, with Leader and the mutated SHIELD scientists against Hulk.  Leader gets the bombs, plants them in a town, covers the town in a bubble, and sets the bombs off…And that’s how it ends.

It’s a set-up for a bunch of gamma monsters running around that Hulk will have to deal with.

During this issue, while we wait for the countdown for the explosion, we see some members of the town.  The most important is a priest.

That’s Father Jason McCall, who will be transformed by the G-Bomb into…Soul Man!  (Next issue.)