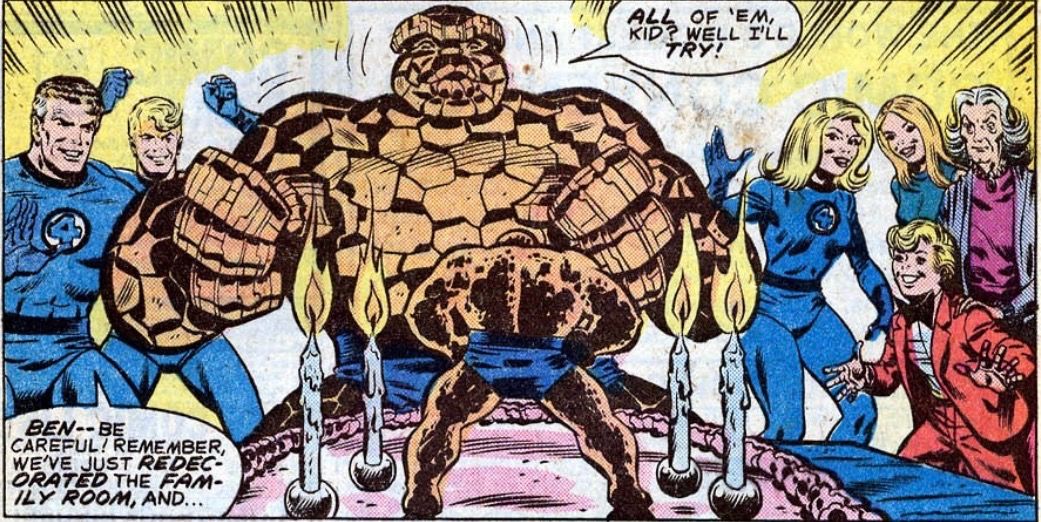 Machinesmith, who will play a major role in the upcoming Stern-and-Byrne Captain America run, is the villain here. Or, at least, a robot version of him is.  We last saw him “die” in Daredevil #55, but here we learn that his robot creations found his dying body and moved his consciousness into a robot.  So now, he’s basically immortal.

It’s fine but nothing worth talking about.  I liked the birthday party shot, above, though.

Machinesmith goes about killing the FF by having the mob interefere with a Yancy Street construction project.  Ben Grimm finds out and goes to save the day.

The Yancy Streeters are largely unnecessary here.  It’s really a Thing solo story as he starts fighting Machinesmith’s androids who pop out of manholes and invade Yancy St.  He gets captured, and in the next issue, Jack of Hearts goes to rescue him, fighting his way through Machinesmith’s robots.

The connection between the two stories is tenuous and involves The Corporation, whose shadowy antics are basically used as connective tissue between various Marvel books at this time. At the end of the issue, Machinesmith is revealed as a robot.  It’s never explained that he died fighting Daredevil or what he’s been doing for the past decade-worth of comics since then.