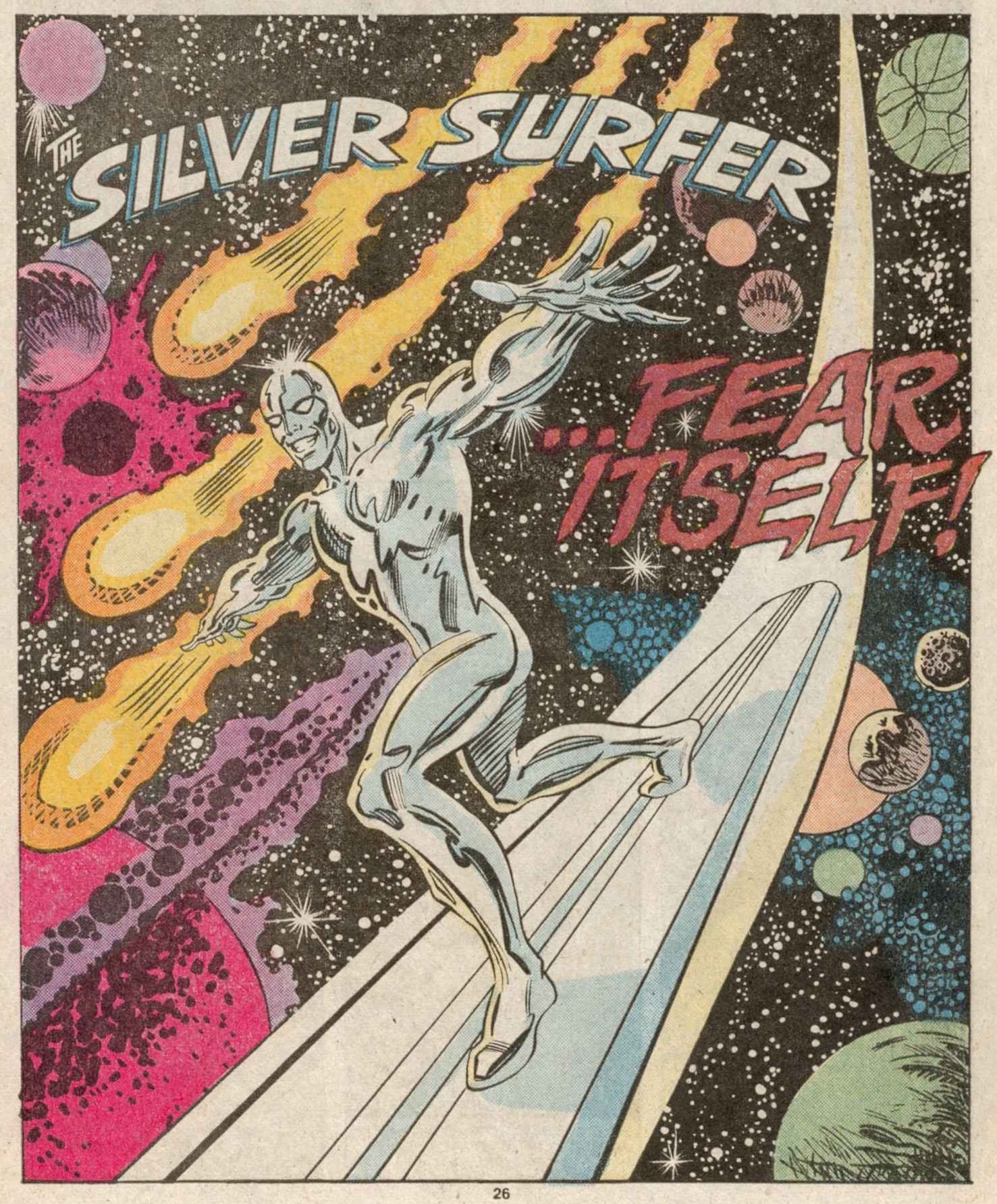 So far, Marvel’s biweekly anthology book has been terrific: Wolverine by Claremont, Buscema and Janson.  The return of both Man-Thing and Shang-Chi by the writers who made those characters worth remembering.  And now…It’s not.  But I do admire the concept: Three stories strung together by a new “villain,” the centipede-like astral parasite Fear Eater, who forces people to be afraid of stuff and then feeds on the fear.

It starts with an 8-page story about Silver Surfer, who already has an ongoing book (and one that is fantastic).  If you’ve already got a solo book—and it’s doing well—there’s no reason to anthologize you.  This book should feature lesser-known characters, or ones who you only see in a team dynamic.  The same is true for Cap and Thor, who also appear in this story arc.  But, again, if this is really about introducing a villain, I get it.  The problem is, this Surfer tale is created solely by Al Milgrom: Writer, penciler and inker.  It basically just has Surfer going over all the things in his past that were scary, like Dr. Doom, Galactus, being trapped on Earth, etc., until he’s able to eject the Fear Eater parasite from his system. One of Surfer’s last thoughts is about Captain America, so next Fear Eater flies ot Earth and jumps into Cap, who now goes by the name The Captain.  I don’t like the way Fear Eater is shown to think/talk like he’s an elder of the universe or some kind of sophisticated being.  I would have made him a straight up, unthinking, parasitic force.  Anyway, Cap is fighting an evil version of Iceman named Cold War (who never appears again), so he gets afraid of being frozen in ice again but eventually he shakes the fear off—of course—and Fear Eater is once again forced to jump.

For the last installment, two eight-page stories over issues 3 and 4, he infects Thing…

…and then there’s a punchline: That’s right, since Daredevil is the man without fear, Fear Eater dies.

This may lead you to believe that the (nonsensical) “villain” is gone for good, but he’ll actually return to fight Dr. Strange.

The fact that he loses just because DD’s logo titles him as being fearless is plain stupid, and moves this story, which was already well below average, into an F story.