David Cronenberg’s remake of The Fly, starring Jeff Goldblum, is one of my favorite love stories.  It’s about a weird, very Jewish looking science nerd (Jeff Glodblum) who manages to get a woman way, way, WAY out of his league to fall madly in love with him.  And the more she loves him, the more he transforms into a monster.  Until, eventually, he’s eating his food by digesting it outside his body and murdering people who don’t get their names above the title, and generally acting like a tool.

In this Avengers arc, the first by the great Walter Simonson, the same story occurs with the genders reversed.  Marrina, a wispy little green bobble headed chick, is taken by the ultramasculine perfect-example-of-a-man (except for the anklewings) to a big fancy party where she eats some bad fish (literally) and transforms into a devastating monster.

And in the end, Namor sticks a sword in her and kills her.

It all starts when Marrina’s feral side is triggered while the team is at a black tie event hosted by Mayor Ed Koch of New York City. …So there must be more to this, right?  I mean, Marrina’s not even a member of the team. 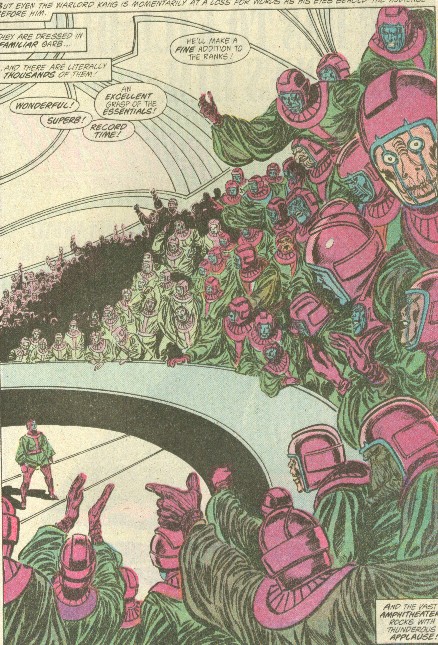 Indeed, the seeds of a grander story are sowed as a backstory, where we see a council of Kangs and, in particular,

a female Kang who is sending an astral projection into Dr. Druid’s dreams, feeding his desire to unseat Captain Marvel as leader of the team. It’s a great way to introduce an arc that will culminate with issue #300.  And there’s a cliffhanger: During the battle with Marrina, Captain Marvel turns into lightning in an effort to stop her, and at the end of the battle, she’s missing.