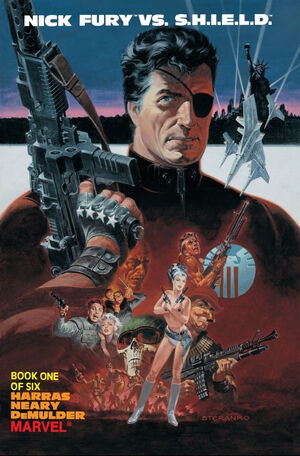 The Nick Fury miniseries had been promised for years, and it finally arrived in 1988 in Marvel’s new “bookshelf” format: 48 page issues with paper covers that were thicker than traditional floppy covers. 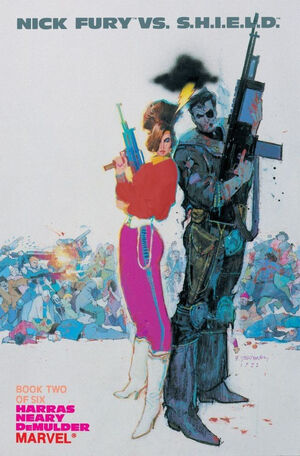 And speaking of the covers, each one of the 6 issues in this series had a different artist and a very different style.  Jim Steranko did issue #1, at the top of this post.  Bill Sienkiewicz did the one above, kind of in the style of his work on Elektra: Assassin.  Other covers are by Mark Bright, Joe Jusko, Tom Palmer, and Kevin Nowlan, who does this very Batman-ish cover: 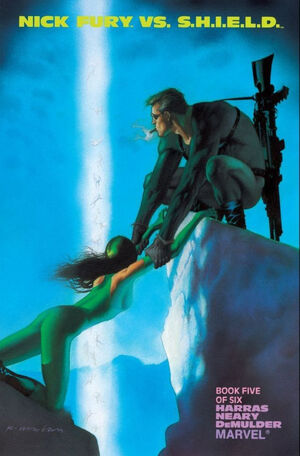 Storywise, this series was a little predictable, but pretty good.  A SHIELD helicarrier is forced to crash due to Hydra sabotage, so that the evil collective can get their hands on the top secret energy core that powers the helicarrier fleet.  Of course, Fury is set up as the fall guy, and the rest of the series has him on the run trying to expose corruption within SHIELD.  The twist is that an LMD of Fury is acting independently to steal the Infinity Formula–the secret to Fury’s ageless body–so Fury is basically trying to expose “himself” as corrupt.  Several story elements were used in the film Captain America: Winter Soldier.

The book did very well–leading to a 1989 Nick Fury series.