In his second appearance, The Beetle gets out of jail (last seen in Strange Tales #123) and vows revenge on the hero who put him there: Human Torch.  What the hell is going on the Marvel Universe penal system?

They even give him back the weapons he used to commit crime!

Also, Human Torch gets jealous of Peter Parker, who innocently returns his girlfriend’s misplaced billfold, which naturally makes her think Parker is the best guy ever.  Seriously.  For Stan Lee, that’s all it takes to win a girl who has been dating Johnny Storm for over a year.

Anyhow, Beetle kidnaps the girl, Torch thinks Spider-Man did it, they fight-then-team-up (about as big a comic book trope as there is), and then they beat up Beetle. 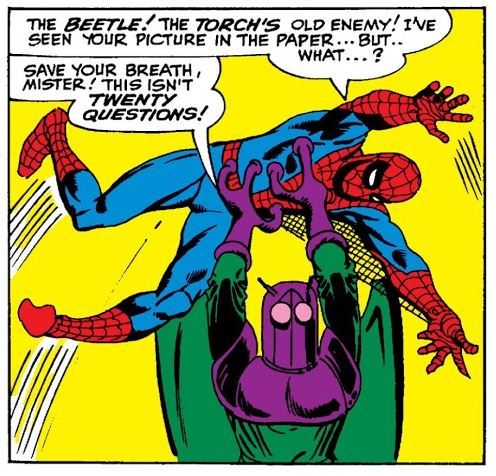 Yes, it takes both of them to beat up Beetle.

This is really a comedy of errors, a madcap issue.  It’s fun, but it’s not close to the top of Lee/Ditko’s game.