Okay, so this is the first truly GREAT issue of this comic since the Iron Man origin story way bck in ToS #39.  First off, we get an extra-long Iron Man story illustrated by the great Steve Ditko.  It’s fun to see him draw Iron Man, but Stan Lee figures out a way to cross-promote, so we see Ditko renderings of all the Marvel stars of the day (above).

The other reason it’s a fun issue is because it’s another “let’s have good guys fight” story, this time with Angel vs. Iron Man.

Angel quits the X-Men to go sign up with the Evil Mutants. The X-Men don’t dare try to stop him because if he joins them, the Brotherhood will be unstoppable! 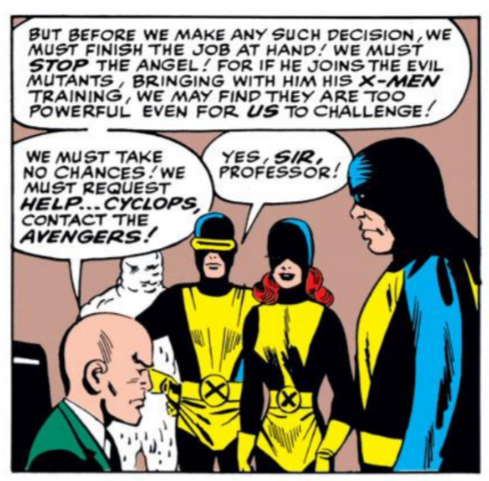 Angel is really overrated in this book, but it’s still a good comic.

He’s been knocked insane for a bit, so we get our first taste of an Archangel(ish) action book.

He holds his own against Iron Man (which is a bit ridiculous), and in the end, they’re all friends again. The other reason it’s great is because of the side-feature “Tales of the Watcher.”  It’s a thinly veiled anti-armament story, but we get so see Uatu doin’ his thing.  It makes him more relevant, and you can see how Stan Lee is interested in developing the character.

Fun fact: This is the first Marvel comic I’ve seen where Larry Lieber did the art, and he would continue for the whole Tales of the Watcher series!

Creators: Stan and Steve (Iron Man story), Stan and his brother Larry (Watcher story).
Grade: A- for Iron Man, B for The Watcher.