Let’s start with the Cloak and Dagger story, because it’s kind of good–but has some definite weaknesses.  It starts with Kingpin swearing he’ll get revenge on Dagger for not reviving Vanessa with her light powers way back in Peter Parker the Spectacular Spider-Man #96.  And not only are the team being hunted by Kingpin, Punisher is after them because he has mistaken the duo’s interest in the drug trade for participation, rather than vigilantism. Power Pack, who are friends of Cloak and Dagger, find out and take on Punisher. 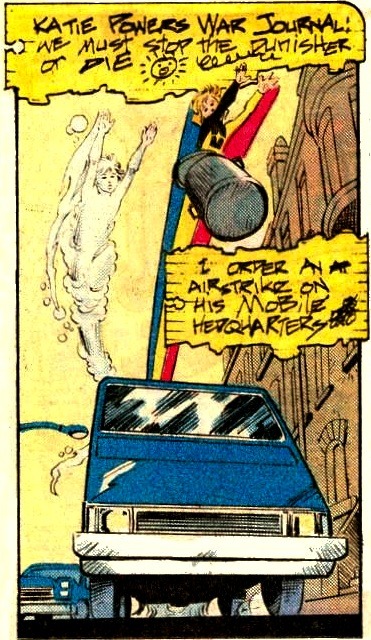 Their good word is enough to convince him they’re not bad guys after all. Yeah, that’s a little dumb.  But now that the gang’s all teamed up, they can take down Kingpin and end the story with another KP scene.  Almost like a framing sequence. If he’s trying to convince the world he’s a spice dealer, why would have “KP” monogrammed on his letter opener?

On the Dr. Strange side, he’s still using dark magic to foil the invasion of our dimension and recover his own magic power.  He succeeds in this story, but the effort makes him blonde…