The classic cover.  The familiar origin: 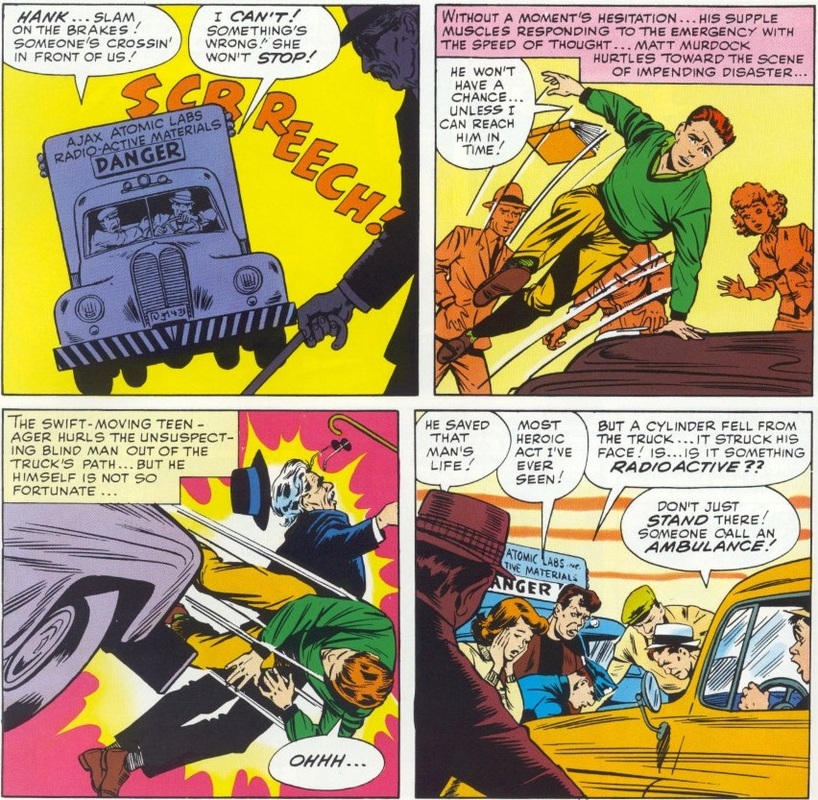 The reveal of his power set!

From the first page, Daredevil was a different than the other books Marvel produced at the time.  Stan Lee was always “wordy,” and that was true here as well, but in this case his need to constantly insert words into each panel mixed with a thoroughly “street” book. DD wasn’t a teenager,  He wasn’t cosmic.  He wasn’t a mutant.  He was just a guy, who got pissed off and put on a costume to beat the crap out of lowlifes (albeit with super senses).  But in flashback, there was, of course, brainy bullying…

It’s almost like Matt Murdock is a grown Peter Parker.  He even hides his abilities.

And he remains determined to be a scholar after his accident…

It’s almost like Stan Lee could only write one character…But I’m not complaining.  It works.

In this book, Lee’s incessant narratives gave the book noir-ish elements and, frankly, he wrote the hell out of this story.  So much better than most of his other work.

The art in issue #1 was by Bill Everett, a renowned Golden Age artist who created The Sub-Mariner and came to Stan Lee as an established artist with a firm pedigree.  (He only lasted on issue on DD before quitting Marvel over creative differences.)

Most Marvel #1s set a tone; it’s one of the things Lee did well as an editor and creator.  Amazing Fantasy #15 established a wide-eyed sense of wonder and a love of misfits.  Fantastic Four #1 emphasized family.  Avengers #1 was pure rock and roll.

And Daredevil #1 was about mystery–the most Batman-like comic Marvel had ever produced.  The dude was blind, a lawyer, and had a built-in lie detector.  I’m pretty sure none of those things had been portrayed in comics before.

And all of the ingredients for the future runs on Daredevil where there in the beginning.  The well-choreographed fights;

And of course, the familiar cast of side characters. 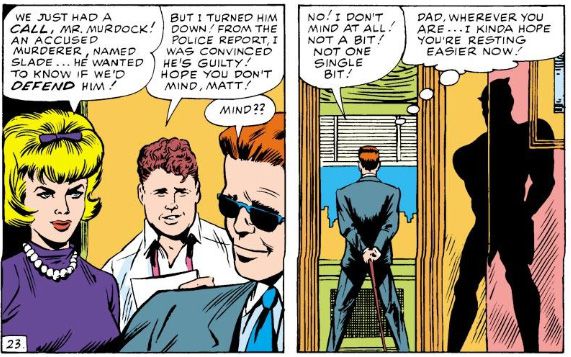