A terrific splash page, as grumpy Thing has to babysit Wundarr-a guy with Supermanlike powers and the brain of a little kid.  They go to the zoo where, of course, Wundarr frees the animals.

Captain America happens to be there, along with Sharon Carter and Namorita, and they help it all get under control.  Namorita offers to be a babysitter, which pleases Thing of course.  It’s really just a way for the character to be freed up for superheroics with Captain America, but I would much rather have had a full story of Thing and Wundarr character moments.

Anyway, the two-in-one heroes go to the future to fight the Badoons where, of course, they meet the original Guardians of the Galaxy. 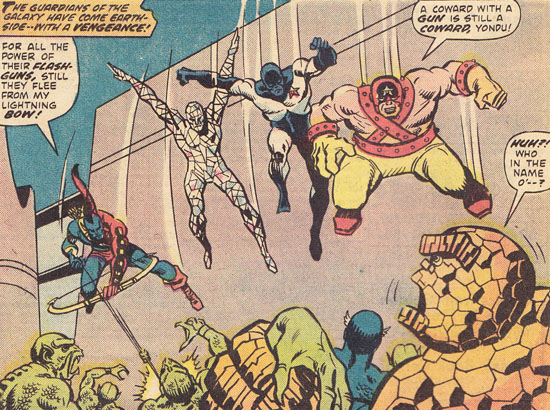 Remember, the original GotG were a future-based team. Then there’s this panel, which also serves a handy-dandy character guide–appropriate at the time because this is only the second appearance of the Guardians of the Galaxy, and the first one in which we understand that their future is part of the future of the entire Marvel Universe.

In the course of the story, Guardian Vance Astro tells Captain America that they met in 1972, before Vance was sent into the future.

Creators: Steve Gerber and Sal Buscema
Grade: C.  Full average.  By today’s standards, it’s probably a little too clunky to be considered average.
For the complete history of the MU, year by year, go here.