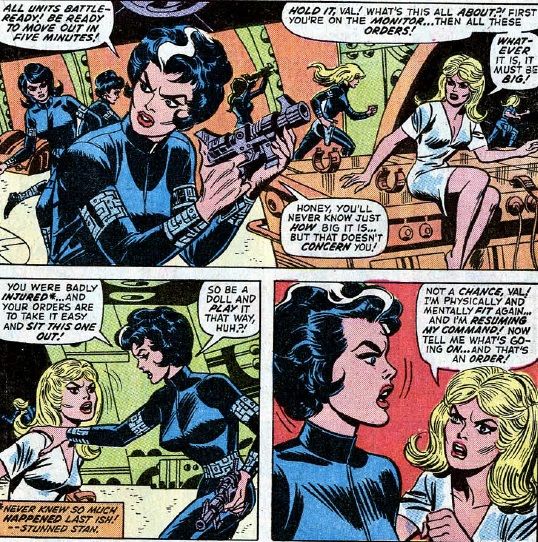 This story is crazy bonkers.  It would be enough if we had SHIELD’s Femme Force fighting alongside Captain America, which we do, but we also get him thinking that Hydra has killed Sharon, aka Agent 17, aka the girl Cap thinks he loves but who he never treats well.  The Femme Force are what passes for feminism in this period…

But even feminists love Cap… 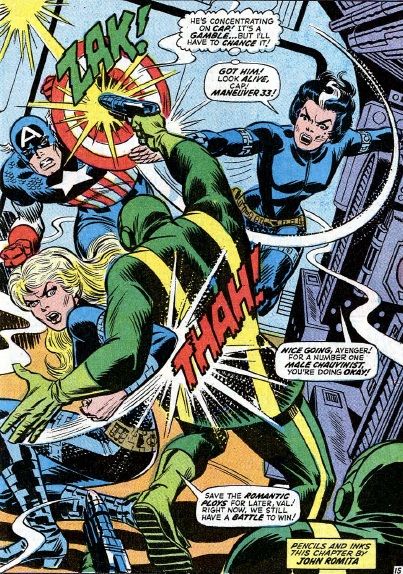 Sharon is the blonde in the Femme Force, and when Cap thinks she’s been killed he gets mad and hardcore, beating the snot out of Hydra and working his way up the food chain. 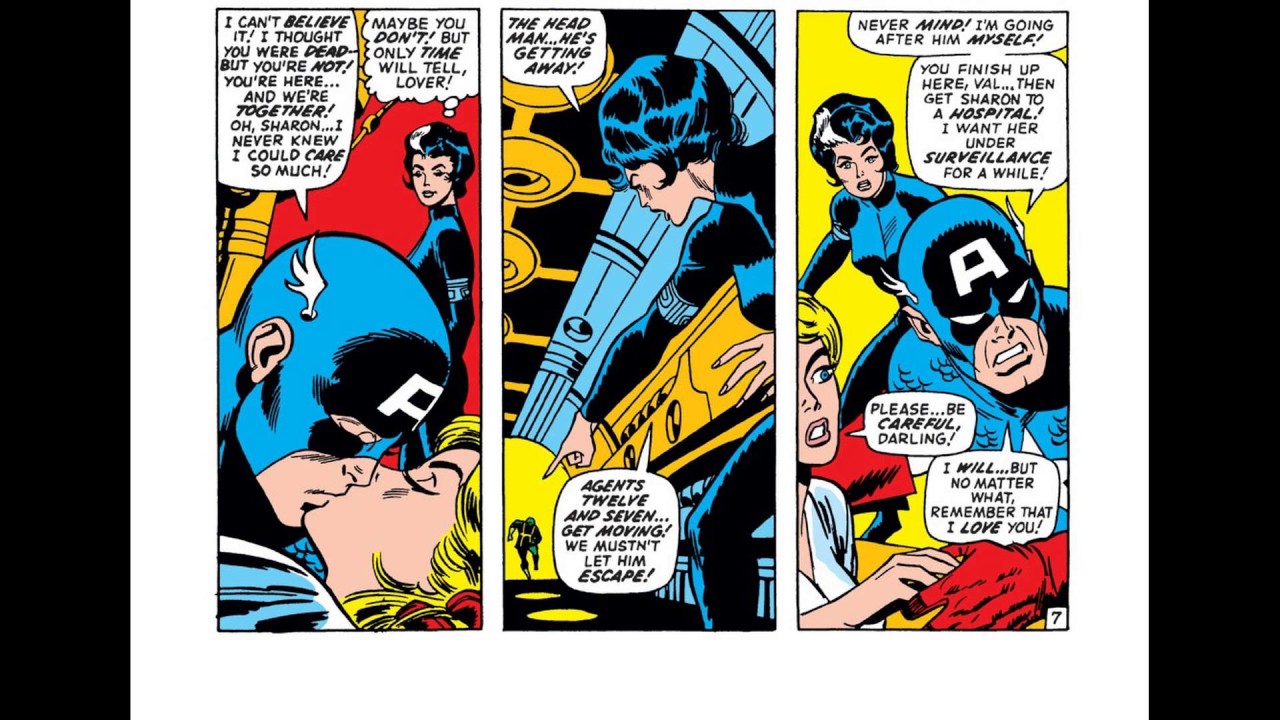 Apparently, Agent 14 has a crush on Cap.

Anyway, when they reach Hydra’s supreme leader and when he gets to the top he finds the enemy has partnered with The Kingpin.  Kingpin, in turn finds out that the unmasked Hydra leader is… That’s right.  Kingpin’s son is running Hydra.  And of course Kingpin is pissed because his son has let Cap track them all down.  And also because his son did it all for daddy.  You see, after Wilson Fisk thought his son was dead, he went into a catatonic state, and his son joined Hydra to get access to electroshock treatment to snap his father out of his coma.

Anyway, when Cap tracks them all down, we get to see him fight Cap. 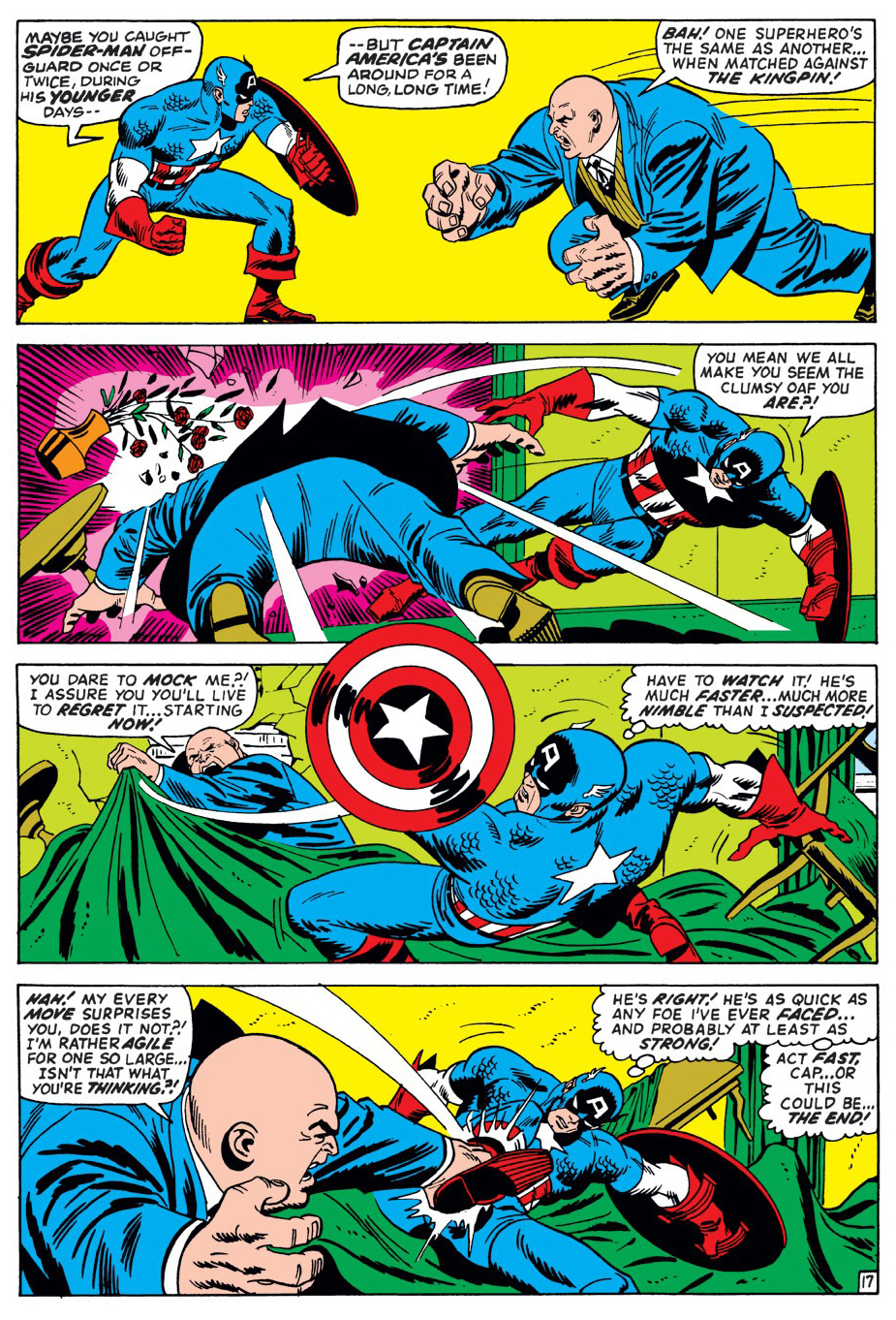 Great fight, if you can accept that a normal, fat guy can beat up a super soldier.  Not only that, Cap is losing until Redwing shows up and starts scratching Kingpin’s bald head.  That’s what turns the tide of battle.

Anyway, it doesn’t end here.  It turns out the leader of Hydra isn’t Kingpin’s son.  It’s Red Skull.  Of course.

And we get the rise of the Fourth Reich.  There’s no real explanation of how Red Skull isn’t dead, but it does connect up a bunch of old Cap stories as “evidence” that we all should have known, all along, that Skull was still alive and being bad.

In the end, it appears that Red Skull dies, but we know that’s not true.