The big wedding.  Of course, in fifty issues it will be undone by retconning Alicia as a skrull.  Thing does his best to be supportive.

The guests arrive.  And… Puppet Master teams up with Wizard and The Mad Thinker to kill Johnny Storm, but only after Alicia becomes his bride—so that she will inherit his sizable estate as part of the Fantastic Four.  And his plan is pretty smart: He’ll use his powers to force Thing to kill Johnny, since Thing has the perfect motive: Jealousy!

But he’s conflicted, and in the end decides he wants Alicia to be happy more than he wants revenge on the Fantastic Four, so he attacks Wizard and the Mad Thinker using Dragon Man. The Thinker’s predictions fail him again; there’s no way his androids had only a 25% chance of losing to the big guy. 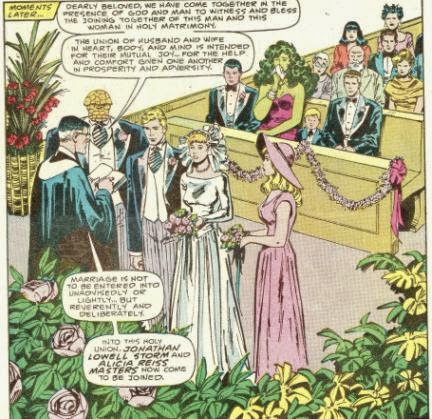 Thus, the wedding goes off without anyone knowing about the planned attack. A most rare event in Marveldom!

Interesting angle: To tell the story of the wedding largely through the eyes of the villains who plan to destroy it.