These are two major issues for Power Pack, following a series of done-in-ones that moved the characters forward by inches.  On the splash page we see Kofi for the first time, who is a Kymellian descendent of the alien who gave Power Pack their powers.  He’s come to Earth because the Snarks are plotting kidnap the Powers kids, and Kofi wants to help them.

Franklin Richards, who has been dreaming about Power Pack, is aware of this plot—even though he’s not fully aware that his dream/fantasies connect to reality… Jarvis is babysitting him.  Those three panels are terrific because they show Franklin, using Star Wars figures, acting out what we just saw in the opening sequence and also because when Jarvis tells him his parents would never leave him in danger he says, “They do all the time!”

Eventually, Franklin hooks up with the kids, there’s fights with Snarks, and Franklin joins the team getting a costume and a codename that reflects his new precognitive ability… 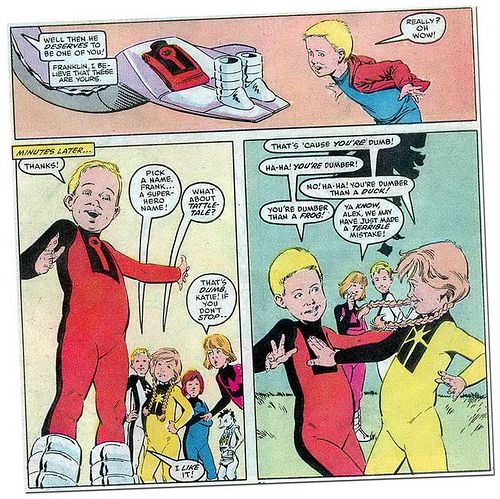 He’s now the youngest member, so Katie is kinda jealous, and the two of them fight like brother and sister—or like two kids who are gonna end up being linked romantically.  I don’t think that ever happened, but it would be cool if it did.  I guess I’ll find out as I keep reading.

This is June Brigman’s last issue as penciller.  She’s done fantastic work on the book.