A Very Special Issue of the Fantastic Four, in which a kid lights himself on fire to emulate Human Torch.  It’s a little strange to do this, especially given all the rumors several years prior that Human Torch didn’t appear on the FF TV show because they were afraid kids would play with play with fire if they saw a cartoon about a guy made of flames.  (These rumors were NOT true.)

1980s Marvel was fond of having stories about kids who read comics getting picked on and bullied by other kids/grown ups who just don’t understand how cool comics are.  But this kid cries about it in class, so he kinda deserves to be beaten up after school.  Actually, I shouldn’t joke because this issue is really, really dark.

The kid loves Human Torch so much that after he gets punched out, he covers himself in gasoline and sets himself on fire. 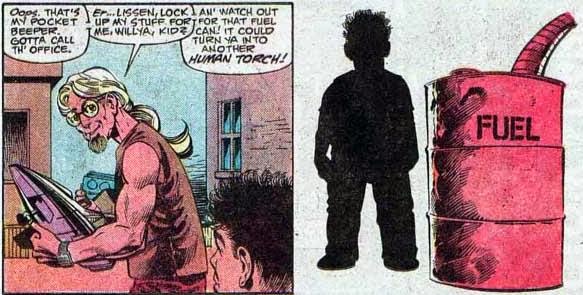 The self-immolation happens off-screen, but Human Torch finds out and decides he can’t be Torch anymore because of it. Then Beyonder kidnaps him and basically does a “Ghosts of Christmas Past” with him.

This is one of the strongest Secret Wars II tie-ins, because it really plays with the notion of Beyonder-as-God.  But there’s some flaws in it.  We just saw, in Secret Wars II #3, that Beyonder didn’t understand basic things like eating, having sex, and the meaning of power—yet here, he is wise enough to teach Johnny about the meaning of life?

Still, if Beyonder’s goal in SWII is to understand the human experience, this is a solid step in his development as a character.  I think the real problem is that Jim Shooter hadn’t really figured out what he wanted to accomplish with Secret Wars II (other than sell books via tie-ins), and therefore couldn’t communicate it to the creative teams of individual books—who he was relying on to keep the saga moving.

Creator: John Byrne
Grade: C+.  Above average for most books, above average for Secret Wars II tie-ins, but below the stellar quality standard established in prior Byrne FF books.