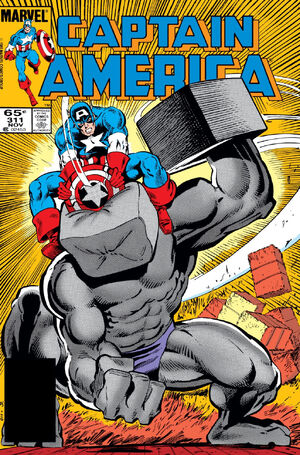 Captain America meets Awesome Android, who is on the run from the law and hiding on a farm.  The Android doesn’t have the warm and sympathetic personality it will later develop.

Then, while at the hospital interrogating Constrictor about the Serpent Society, Captain America foils an assassination attempt by Scourge. We’ve seen the character kills several D-list villains in other books, but this is the first Scourge meets a superhero.  Marvel did a really good cross promotional job with this story.  Way better than Secret Wars II, which was going on at the same time.

Also, Steve Rogers is hired by Marvel to draw…Of course.

Also, Kingpin hires the Serpents for a small job and AIM hires them to kill MODOK.