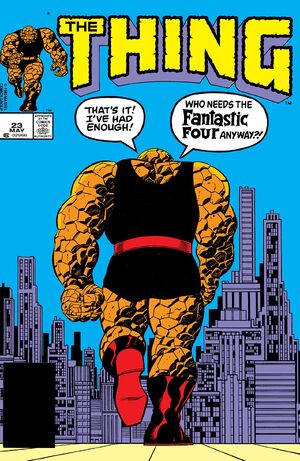 Of all the things that happened in the Marvel Universe in the 1980s, Johnny Storm taking up with Alicia Masters after Thing decided to stay on Battleworld is one of the strangest.  I mean, I get that Johnny thought Ben Grimm would never return to Earth, but it’s not like he and Alicia had just a casual relationship.  And on the Alicia side, I don’t understand how you go from someone as tragic as Thing to a guy like Human Torch

And then to make it so that Thing could have been “cured” of being all rocky at any time in his history, but he was subconsciously preventing his own transformation is…Ridiculous.  Are we actually saying that the effect of radiation to turn your body into a giant pile of orange rocks is psychosomatic?

But if these things happened to me, I’d quite the FF, too.

For the complete history of the MU, year by year, go here.
And see my Ratings of Runs on comics here.
THING, HUMAN TORCH, REED, 1985