Moondragon gets a new costume to reflect that she’s now a lawful good hero, but the team is falling apart.  They still don’t trust her after she used her mental powers to control them.  Gargoyle is left-handless as a result of their big battle where he got possessed and turned bad.  Iceman had a crush on cloud who, it turns out, is gender fluid and this issue is taking the form of a boy so Iceman is confused.  (Knowing that he’s gay makes his confusion, in retrospect, even more interesting.)  And the main story is about a black boy accused of raping his black female teacher, but it turns out he didn’t rape her at all—he just had some latent mutant mental powers that touched the teacher’s mind and confused her, and Moondragon is able to sort it out.

This is, quite obviously, an extremely complex book. 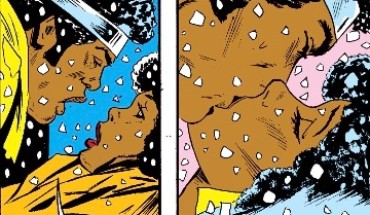