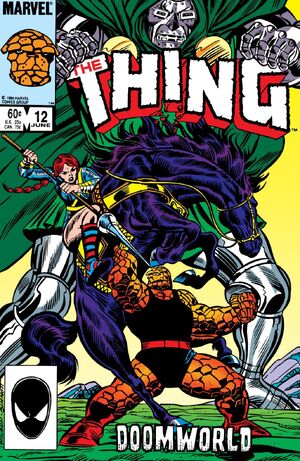 Thing comes across a part of Beyonder’s hodge-podge planet that is occupied by old-timey warriors on horseback who are fighting an oppressive wizard that has modeled himself after Dr. Doom.  Which makes sense, since Doom was a pretty big-and-powerful force during the Secret Wars that formed the Battle World.

So far, Thing is not a great comic.
Creators: John Byrne and Ron Wilson
Grade: C-

For the complete history of the MU, year by year, go here.
And see my Ratings of Runs on comics here.
THING, DOOM, 1984