ROM takes on a Skrull invasion of Earth, only the Skrulls are here for the same reason ROM is: To kill Dire Wraiths!

We learn that Wraiths are actually mutant Skrulls—a new race that came from the original Skrulls—so ROM and Starshine team-up with the green aliens to clear out Clairton. 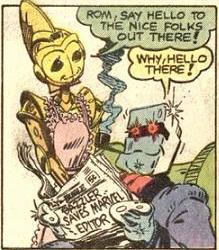 Also, they finally get around to killing the useless hero Torpedo, who was supposed to be protecting Clairton in ROM’s absence.

Eventually, ROM and the Skrulls eradicate the Dire Wraith plague in Clairton, but in the process every single citizen dies.

That’s a pretty hefty civilian body count–especially for a comic based on a toy!

Also, #50 is the January issue so it’s Assistant Editors’ Month.  They make the issue a double-sized one, so the back-up story doesn’t cut down on the above-average regular story.  The AEM contribution is a one-page story reimagining ROM and Starshine as basically I Love Lucy.  It’s funny.  ROM becomes a toaster.

Also, of course, there’s the cornerbox on the cover.

Then, a bunch of pin-ups to fill out the issue.

This is one of the best issues of this book so far.