Matt Murdock proposed to wealthy heiress Heather Glenn back during Frank Miller’s run, and Matt told her he was Daredevil.  He then tore her life apart, bit by bit, until she was totally dependent on him, and then, when she finally accepted his proposal, he dumped her.

Matt was a tool.

Then, Heather switched from depending on Matt to depending on alcohol, and told Tarkington Brown, who worked in the Mayor’s office, that Matt was Daredevil.  Then she told Matt.  Then Tarkington decided to kill Matt/Daredevil. 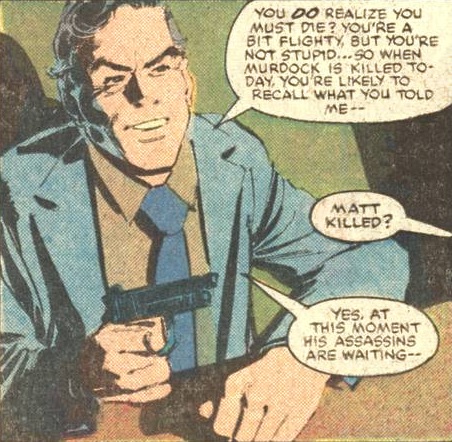 Then Matt went after Tarkington, and learned that he was, at night, a vigilante who killed criminals as  a war on crime—much like Punisher, only much less discriminate.  DD told Tark that if he betrayed DD’s identity, DD would betray Tarkington’s.  That stalemate started the next Daredevil arc, which consisted of mini-stories of DD’s battle against Tarkington until a big finish in #200.