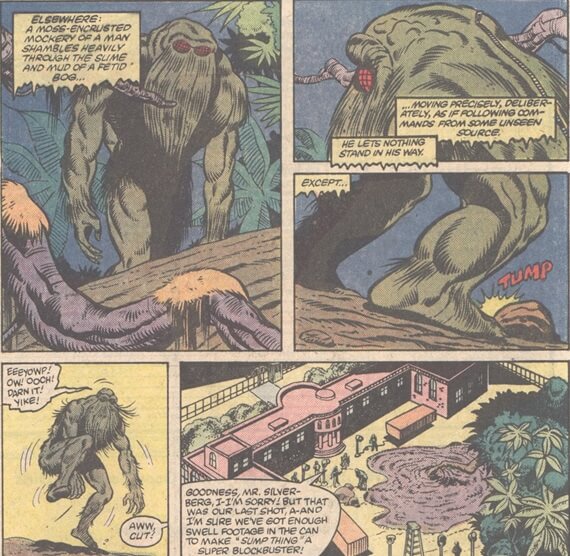 This feels like a 1960s story.  A film director wants to beat up Thing as revenge for a past transgression, so he buys a special effects machine that actually brings things from the past into the present and throws dinosaurs at Thing.  Iron Man is in it, too, but really doesn’t need to be.

The movie is called “Sump Thing,” and features a very crudely drawn version of DC’s Swamp Thing, who himself appeared to be a copy of Man-Thing (but in reality I understand the characters were developed at the same time).

One cute little aside: While on the Hollywood lot, Thing comes across the set for “John Carpentry’s, ‘The Mess.’”  Of course, we all know the film they were spoofing was “The Thing,” our heroes own name.  Nice.  This isn’t a bad issue, it’s just a little too silly for the 1980s.

This book is winding down.  Just a few more issues to go.  The only good thing about most issues of MTIO is Ron Wilson.

Creators: David Michelinie and Ron Wilson  Grade: C
For the complete history of the MU, year by year, go here.
And see my Ratings of Runs on comics here.