This one is for all the marbles.  Actually, it’s for Tony Stark’s marbles.  And he loses them.

It starts with him being interrupted on his date with Indries, who was injured during the Knight’s attack on Start Industries and now, apparently, Tony is her sugar daddy.  He is interrupted because his security team has traced the attacking Knight to Glen Travail in Northern Scotland, and so Tony and Rhodey must pursue the lead.

How many heads of corporations do their own criminal investigations, and why aren’t the police also on the case?  I don’t know.  But, of course, Tony is also Iron Man so … Duh.  Indries accompanies Tony and Rhodey to Scotland, which is much more inexplicable. Once there, Iron Man fights Bishop and Rook, there’s an inventive death-trap story (I should do a feature on the best Deathtrap comics—so far my fave is probably Daredevil #207, but I know Arcade has quite a few, too).

Mingled in with the Scotland action, we see that back home Melter is stalking Tony…

Really, Mrs. Arbogast?  You let Melter hang out in the waiting area? Also, Tony is getting increasingly stressed, and there are multiple scenes where he is being tempted to drink.  He’s losing his shit, bit by bit.  Although, having just seen her let Melter take a number, I kind of agree that Mrs. A is a bit thick.

After beating up Melter, Tony finally learns that a munitions competitor, Obidiah Stane, is behind all the Chessmen attacks. 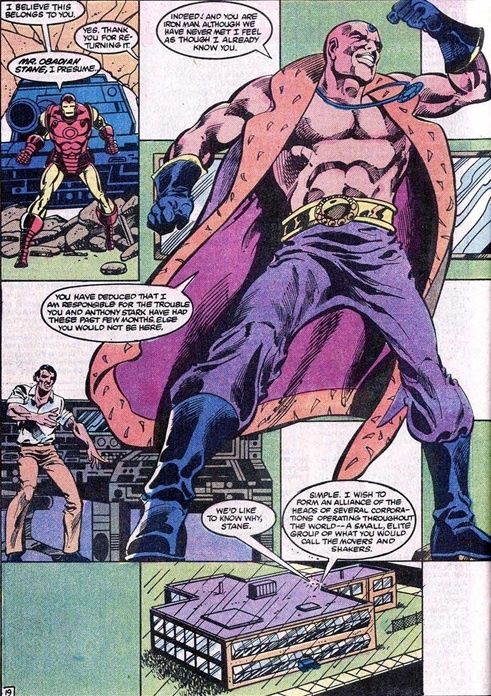 After some extended back-and-forths, it is clear that Stane has outplayed Tony.

Indries, it turns out, is his Queen piece.  She’s been a traitor, and her betrayal is what finally pushes Tony over the edge.  Let’s take a minute to admire the layout of the page above—it builds the big reveal so well.  And then, when you turn the page… It’s disappointing that Tony never asked his Avenger friends for help during all this, but it also makes sense given his tremendous ego.  An excellent and believable “alcoholic slip” story—which is a story that had never been done before, and really hasn’t been done as well as this since.