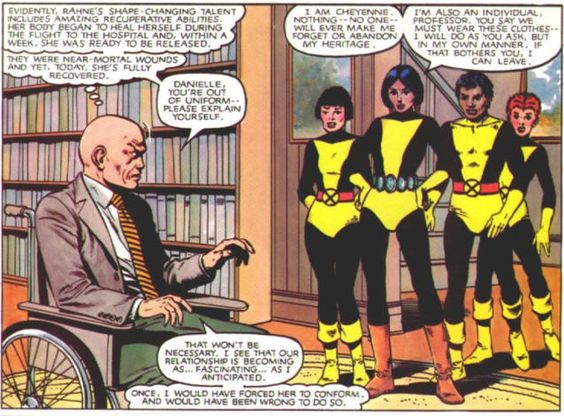 After two out-of-continuity Graphic Novels (including one that brought Dreadstar to Marvel’s Epic imprint line—a truly amazing comic by Jim Starlin), we get a Claremont X-Men tale that really, really matters.  Mostly because it introduces a new group of mutant teens: The New Mutants.  They’ll get their own title next year, but for now we meet the crew in a series of vignettes about them as individuals having trouble with their powers.  Most of them are brand new characters (Cannonball, Sunspot, Psyche, and Wolfsbane), but Karma, who was introduced by Claremont and Frank Miller in Marvel Team-Up #100 to the team is also added as a member.  She’s also the only one with a superhero name—the other four are called by their given names of Sam, Roberto, Rachael, and Danielle.

The kids come together because The Hellfire Club is screwing with them (they even kill Danielle Moonstar’s pet mountain lion!), and Professor Xavier pulls them together to save them.

The story is solid, but the real kudos here go to Claremont introducing a team with an Hispanic, Native American, Asian, and Irish female—and one with more girls than boys.  This kind of gender balancing and internationalism had NEVER been done in a comic before.

Creators: Chris Claremont and Bob McLeod
Grade: B-
For the complete history of the MU, year by year, go here.
And see my Ratings of Runs on comics here.