Bob Layton left with issue #152, followed by a series of fill-ins and David Michelinie writing without Layton. The overall writing quality dimmed significantly–but we did get some cool art from Paul Smith (above) in #159, and interesting Steve Ditko work in #160.  But all of this was to make way in #161 for the new creative team of Denny O’Neil and Luke McDonnell. Great, great Iron Man stories coming soon!  And Denny O’Neil actually wrote last issue, but his run is broken by this fill in issue drawn by the great Paul Smith.  The art is good.  But he fights Diablo.

But this is actually a pretty cool story.  It starts by continuing where Fantastic Four #232 left off (that was Diablo’s most recent appearance), and adds a segment with Dr. Strange casting a spell that turned Diablo into an old man with no memory of being Diablo, and teleported him into a job as janitor at Stark International.  It’s a long way to go to get him into Iron Man’s life, but it’s also kind of funny and cool.  Dr. Strange is obviously trying to rehabilitate him, but unfortunately the spell wears off.

So, although those panels are a flashback, they constitute appearances for these characters because it’s entirely new material.  (I don’t tag characters appearing if it’s solely a flashback or a dream.) 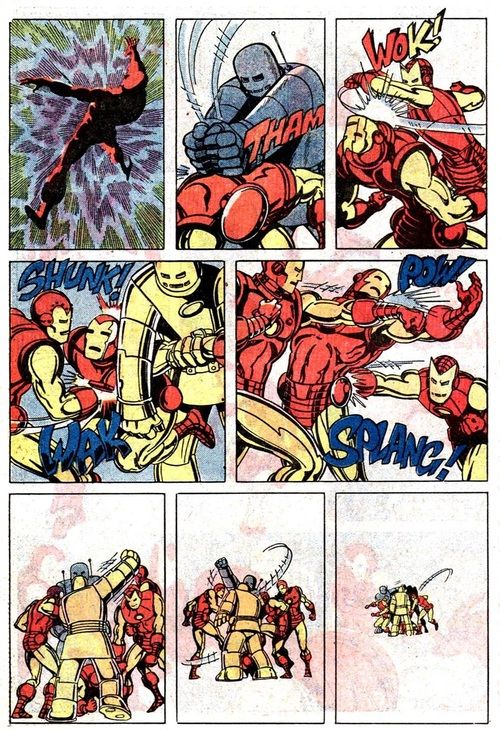 Once he remembers, he makes bad stuff happen at Stark International and Iron Man gets involved.  We’re treated to many pages of battle, including two full pages of Diablo animating old armor so we get to see Paul Smith drawing (almost) every Iron Man from history.
This is a really good fill-in, mostly because it KNOWS it’s a fill-in and doesn’t try to be more than that: It’s just a fun fight issue, of no consequence, and the creators clearly are having a laugh.

Creators: Roger McKenzie and Paul Smith
Grade: B+
For the complete history of the MU, year by year, go here.
And see my Ratings of Runs on comics here.