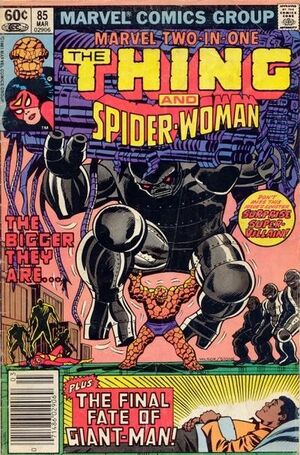 Hm.  Bill Foster has been dying for what amounted in the 1980s a very long time, with six issues of Marvel Two-In-One having the matter serve as part of the ongoing plot.  But on the cover, his “final fate” gets less than 25% of the space.

But when Captain Marvel dies, he gets an oversized, expensive graphic novel?

Hm.  Is that racism I smell?

Still, there’s several pages dedicated to teary goodbyes.  And, in the end, a twist: Due to a transfusion from Spider-Woman, Foster is cured! So he doesn’t die after all.  The second twist: Spider-Woman loses her “immunity factor” that makes her immune to poisons—a power that most people had no idea she possessed in the first place.

So, no, I didn’t smell racism.  False alarm.