Just a brief look at the past few weeks of interesting stories.

DCTV.  DC’s original programming streaming service, DC Universe, will feature a Swamp Thing series to be directed by James Wan, the Titans series rejected by TNT, new Young Justice and Harley Quinn cartoons, and a Metropolis show that will take place before Superman and will feature Lois Lane and Lex Luthor, to be produced by the guys who produce Gotham.

BLACKHAWK.  DC’s WWII fighter pilot will become a major movie, produced (and possibly directed) by Steven Spielberg and written by David Koepp, who has worked on sequels to Jurassic Park and Indiana Jones.

AMERICAN WAY.  The 2006 Wildstorm comic about a black civil rights superhero, was written by John Ridley—who since won the Oscar for screenwriting for 10 Years a Slave.  The comic will be adapted for screen by Blumhouse Productions, the studio behind Get Out, Whiplash, and The Purge.

MITCH GERADS TO STAY AT D.C.  The artist behind two of the best comics of the past five years, Mister Miracle and The Sheriff of Babylon (on DC’s Vertigo imprint), resigned with DC.

DC’s YOUNG ANIMAL IS DEAD.  The imprint publication responsible for some very interesting books like Doom Patrol and Eternity Girl, will end in August.  DC says the line will return, but it’s unclear if it will continue to be managed by New Chemical Romance’s Gerard Way. The line recently got increased exposure during a five-issue tie-in with Justice League called Milk Wars.

WATCHMEN.  The new HBO adaptation, created by Damon “Lost” Lindelof, will star Don Johnson, Regina King (from Lindelof’s last, and excellent, HBO series, The Leftovers), and Louis Gossett Jr. The series will be a very loose adaptation of the comic, forging mostly new ground and featuring many new characters.  It’s set in the same “universe” as Watchmen, but will tell different stories.

SPIDERGEDDON.  Marvel is planning a Spider-Man event later this year.  It will tie to the new creative team on Amazing Spider-Man, Nick Spencer and Ryan Ottley, who took over for Dan Slott (after he spent a decade writing the character). I’m a fan of both creators, but I have to say that Slott’s last couple years on Amazing really ran the book into the ground, and what I’ve read so far of the “reboot” hasn’t impressed me.  Of course, most Marvel books aren’t impressing me these days.  They seem to be spending most of their time on movie stuff—and need to get back to basics.  Anyway, the event will have Spider-Man in his black costume.

YABBA DABBA DINOSAURS and SCOOBY DOO AND GUESS WHO?.  Boomerang has ordered full seasons of a Flintstones spin-off focused on nobody’s favorite characters Pebbles and Bamm-Bamm, as well as a new Scooby Team-Up series that will feature guests like Bill Nye the Science Guy, Sia and Wonder Woman.

NIGHT FORCE.  Marv Wolfman (with Pop Mhan on art), the creator of the 1980s DC Comic, is bringing them back, and will feature Raven, Klarion the witch Boy, Black Alice, Zachary Zatara, Kid Devil, and Traci 13.  This book has never done well in any of its iterations, but they’re trying again. 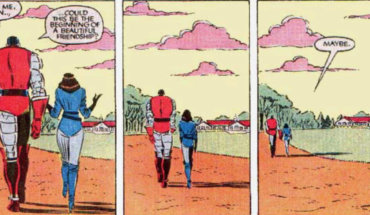