A Dire Wraith and a human had a baby, and named it Hybrid. It sets off Cerebro, so ROM meets the X-Men for the first time. Of course, they are trying to protect the mutant and he’s trying to kill the Wraith, so there’s a fight.

ROM is actually a pretty hardcore character, trying to kill a baby that’s half human.  Even Punisher never killed a baby.

But you know who is even MORE hardcore?

Kitty Pryde, who actually does the killing because ROM is having trouble with his neutralizer and she is able to be partly out-of-phase, so the problem doesn’t affect her. Also, there’s a friends-fighting-friends-they-haven’t-met-yet scene, and ROM does pretty good against the X-Men. 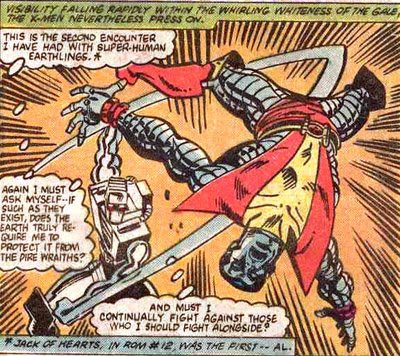 At the end of the battle, ROM is trapped in the Limbo dimension, along with all the Wraiths he’s been neutralizing as well as Space Phantom—the old Avengers enemy.  He ultimately escapes with the help of the first Spaceknight, Firefall, who also occupies Limbo.  Since Limbo is the dimension Majik can teleport to, this event ties ROM firmly to the X-Men’s future.