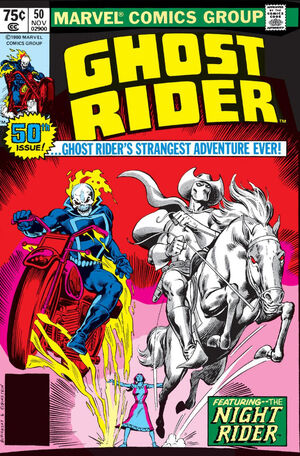 I know what you’re thinking: Issue #50!  Must be something big and different, with lots of guest stars, right?

Johnny Blaze takes on a Native American ghost with ties to the old west, which displaces him in time and has him meet up with the first Marvel Ghost Rider, who is now being called Night Rider, not to be confused with Knight Rider, because it would be too confusing to use his original name of Ghost Rider.

Night Rider was from the Golden Age of comics, and he was basically just a dude who had mystical spirit power that could make him invisible and/or glow.

Eventually, they make nice with the Native American spirit and Ghost Rider returns to his timeline and everyone goes their separate ways.

Kind of a lost opportunity to have Night Rider come forward or otherwise do something to make Ghost Rider a more interesting character.  Oh well.

Creators: Michael Fleisher and Don Perlin
Grade: C+
For the complete history of the MU, year by year, go here.