Carmine Infantino is the guest artist, and while I usually don’t appreciate him as an artist, there’s something about the way he draws long lines and has an overall sketchy quality that works well with Ghost Rider.  In these issues, for the first time, Johnny Blaze and the Ghost Rider are physically separated by an old man who has a magical crystal ball.

It would have been cool to see this story continue longer before returning to the status quo. It’s an above-average story in a book that is often below average, so it’s a B-.  It’s also kind of important because it’s the first time Marvel separated a body from its alter ego—which they would do in the future with Hulk, many times.  Of course, it makes more sense here since Ghost Rider is a demon stuffed inside a human body, whereas Hulk is just a radioactive effect on a human body.

Creators: Mike Fleisher and Carmine Infantino
Grade B-.
For the complete history of the MU, year by year, go here. 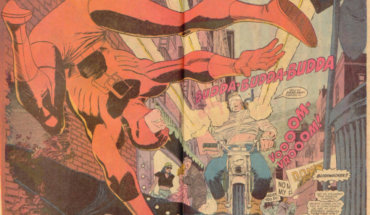