Home
Earth's Mightiest
Giant-Size Man-Thing #4 (1975): The Return of Howard the Duck and the 1st Hellcow 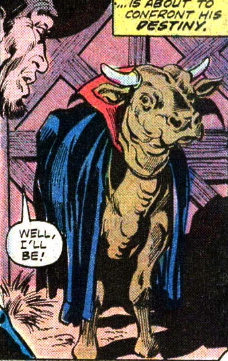 Technically, there’s other stories in GSMT#4 than the Howard one, but they’re not all that different from the done-in-ones Gerber was writing in the main book, so it’s not clear why they need to be in this oversized issue.  And really, it’s the HtD tale that makes this issue matter.

Last we saw him, Howard was falling to what we were told was his death.  That’s exactly where this story starts, only instead of dying, Howard lands in Cleveland, where he has to fight Garko the Man-Frog.  Howard takes a swing at him, just when Garko is shrinking and turning into a real frog, which makes Howard punch a cop who was standing behind Garko.  Howard gets arrested for assaulting the officer.

And that’s where #5 picks up.  Howard gets out of jail and goes to investigate a local farm slaying because, as a result of his own wrongful arrest, Howard now wants to be a cop.  No, it doesn’t make sense, but he’s a duck.

And speaking of not making sense, the killer is a vampire cow named Hellcow.

Creators: Steve Gerber and Frank Brunner
Grade: C+
For the complete history of the MU, year by year, go here. 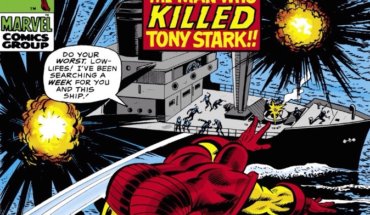 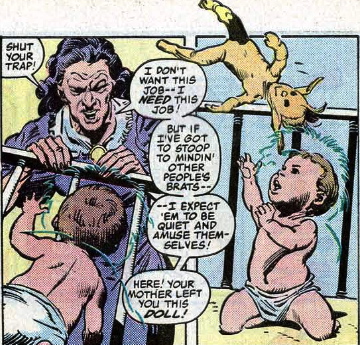