Parts of this issue are really cool: Despite the fact that at the end of last issue the team invited Black Panther to join up, he still sneaks into the Mansion.  So we get to see the defenses at work.  And it’s not because he’s a black man that they weren’t here to welcome him, it’s because…They’re dead!

When he finally outsmarts all the robotic obstacles (and I love stories where the hero runs through a series of defenses like this!), he gets to the main room and Goliath, Wasp, and Hawkeye are all on the floor dead.

SHIELD agent Jasper Sitwell sees the black man standing there, and immediately arrests him for murder.   Things haven’t changed much from then to now, I guess.

Of course they’re just injured, not dead, and the culprit, making his debut, is The Grim Reaper.

Brother of Simon “Wonder Man” Williams, out to avenge his fallen family member.

Panther has a new costume in this issue—his facemask is open so you can see his mouth.  Makes him look a lot like Batman. I can’t imagine why anyone, including someone as great as John Buscema, would mess with a Kirby costume.

In addition, Roy Thomas tried to change his name to “Panther”—presumably in response to the political tension in the late 1960s surrounding the Black Panther movement (although he tried to paper over his intent by saying it was just because there were already two Avengers characters with “black names,” i.e., Widow and Knight.  Hm.  That sounds like bullshit to me.  They changed the mask because if he didn’t have “black” in his name, then Stan Lee wanted readers to know the character’s race.  And before you accuse Stan the Man of pandering, know that it was important to have a black character in comics—there weren’t nearly any around at the time.  Plus, pandering is what Marvel’s all about.  It’s no different than what they’re doing today, trying so hard to recast their classic characters as women and minorities.  Today’s inclusion was yesterday’s pandering.

In the end, all gets resolved and Black Panther officially joins the team. 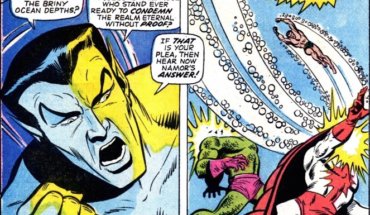 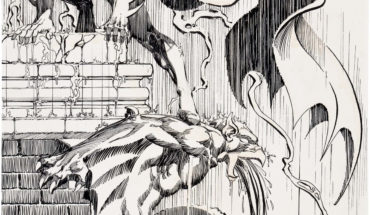