Home
Earth's Mightiest
COMIC BOOK NEWS OF THE WEEK: The Beginning of X, the return of SiP, and more! 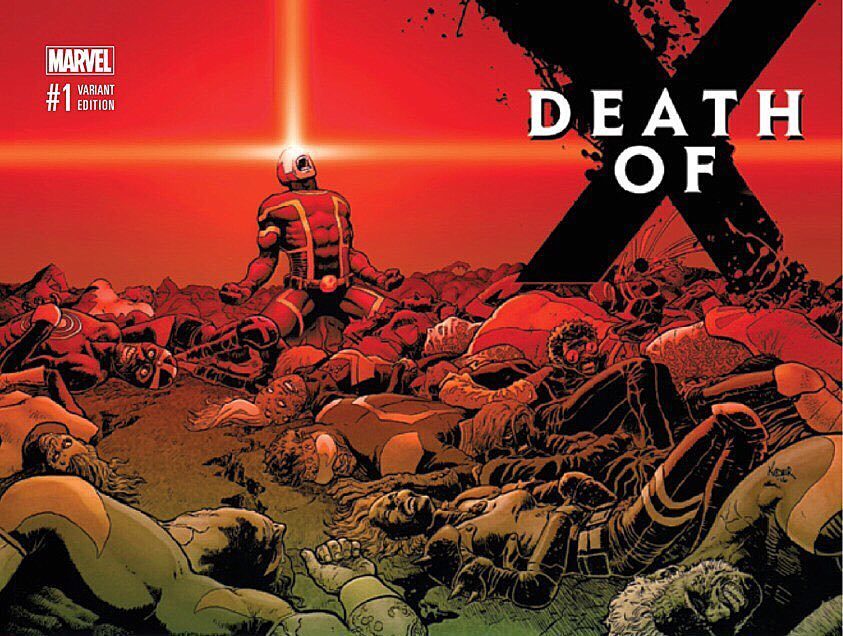 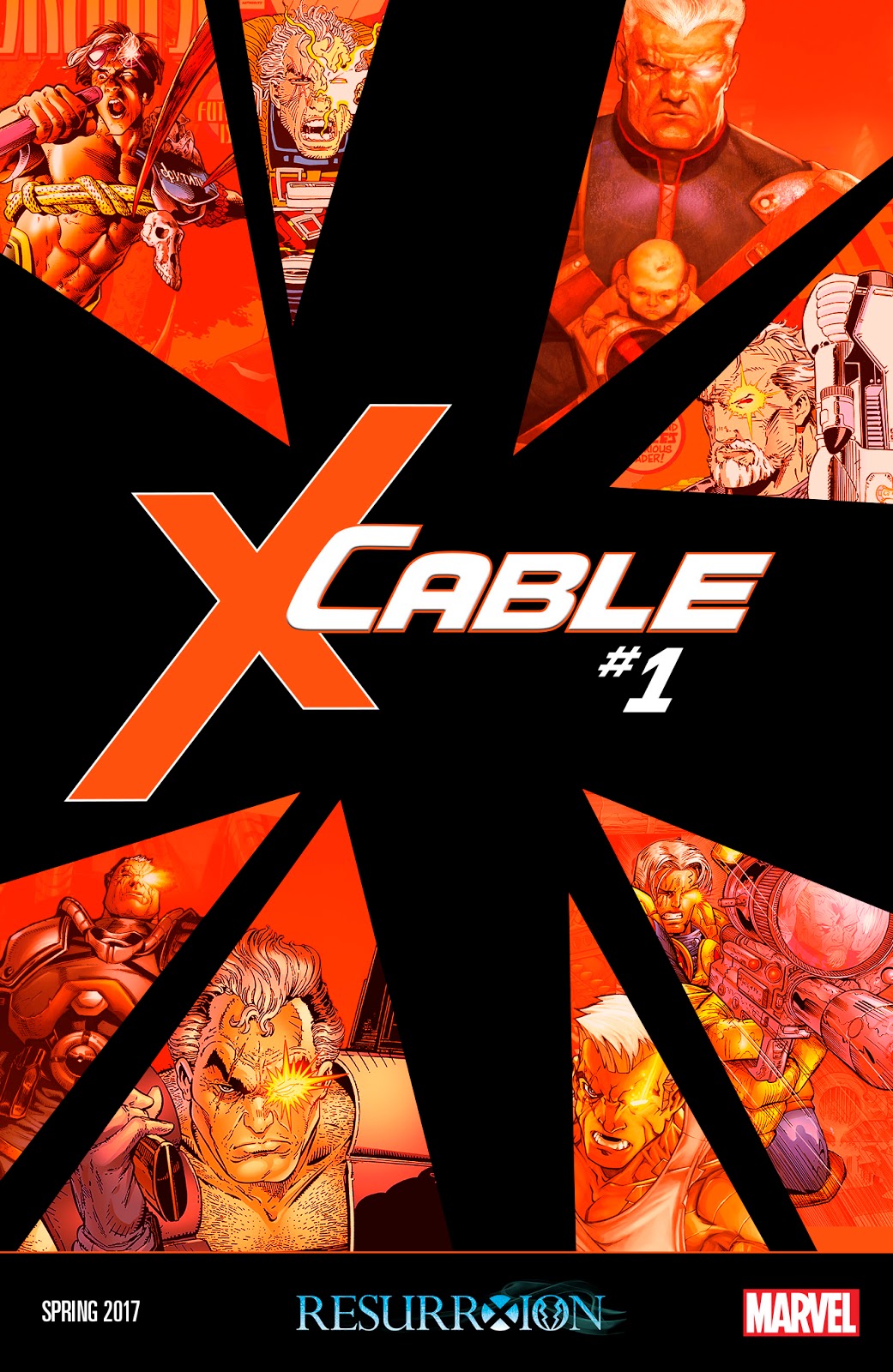 Just a lot of little interesting stories this week, but let’s start with the State of the X. At the time I’m writing this, I’ve read two issues of Marvel’s “End of X” minievent (miniseries), and I really like it. I love the art, the writing is good, a lot happens, and you don’t have to read any tie-in issues to understand it. Take that, Civil War 2! Being self-contained is especially important because I’ve dropped all the X-Men team books. I’m currently only reading Old Man Logan and All-New Wolverine (and I’m on the fence with that one). The others just weren’t interesting. It really looked like the engine was out of steam, and the X-books were fading away—just like everyone said: Marvel doesn’t own F4 or X movie rights, so F4 and X books get less focus.

But it looks like all the conspiracy theories about Marvel getting out of the mutant biz because they don’t own the film rights were wrong, and, frankly, we should have known that: Deadpool still has half-a-dozen appearances a month, and several solo, team, and digital only series.

Turns out, “End of X” is actually a reboot of the X-universe, and we will end up with quite a few Xbooks. There’s even cute branding for it: ResurrXion. We’ll get some solo titles: Another Iceman solo title, the first-ever Jean Grey solo book, and books for Weapon X (described as the “dark” book for the line) and Cable, as well as two team books named after the 1991 versions of the X-Men teams: X-Men Blue (first appearing in X-Men #1 by Chris Claremont and Jim Lee, featuring Cyclops, Rogue, Gambit, Wolverine, Beast, Psylocke and Jubilee) and X-Men Gold (from Uncanny X-Men #281), featuring Colossus, Bishop, Storm, Jean Grey, Iceman and Angel. We’ll also get Generation X, about the Xavier School. It’s unclear whether the new books will have the same teams as the original Blue/Gold distributions, but it does seem clear that the X-Men are returning to where they were when they were at the height of their popularity: The late 1980s and early 1990s.

MARVEL SELLS OUT. No, I don’t mean in their Disney dealing. Marvel’s Amazing Spider-Man #20, Prowler #1, Black Panther #7, and Dr. Strange And The Sorcerors Supreme #1 all sold out their first printings—and this at a time when Marvel is losing the monthly sales wars to DC. Why? No idea. But both Panther and Prowler feature African American leads.

THE RETURN OF BATWOMAN. Comics’ first openly lesbian Jew, Batwoman, was awesome back when Greg Rucka and JH Williams will were creating her adventures, but since then she’s been, well, about as good as most DC books. Which is to say, dull. But she’s coming back, and this time Marguerite Bennett (Batgirl, Insexts) will write it and Steve Epting will draw it. Epting was part of Ed Brubaker’s seminal Captain America run, which took a floundering character and successfully reinvented him, so hopefully he’ll be able to do the same here for Kate Kane.

VERY COOL STUFF COMING FROM DRAWN & QUARTERLY. In May, the great Guy Delisle will release his black-and-white graphic novel (430+ pages!) about Christophe André, the Doctors Without Borders worker who was kidnapped for 3 months back in 1997. Then in June we’ll get Jillian Tamaki’s “Boundless,” about women are affected by cultural expectations.

JUSTICE LEAGUE/MORPHIN POWER RANGERS CROSS-OVER. I expect we’ll be seeing quite a bit from the Mighty Morphins, given that Brian “Mr. White” Cranston is starring in the film adaptation of the cheesy TV show, so I can’t blame DC for jumping on the bandwagon. The DC/BOOM! Studios digital-only series will be written by an expert at non-canon DC stories, Tom “Injustice” Taylor, and drawn by Stephen Byrne.

STRANGERS IN PARADISE WILL RETURN! If you’re a regular reader of this site, you know I think Terry Moore is one of the greatest living comic book creators. The series that made him famous was Strangers in Paradise, a beautiful, hilarious, and stereotype-challenging book that was years ahead of its time. Moore recently announced that, after ending his horror book Rachel Rising, he will be returning to the SiP universe with a book called “Motor Girl” about the SiP character “Aunt Libby.” God bless Terry Moore, and I hope this revival helps him get closer to an SiP TV series—a deal he’s been circling for decades.

SCOUT, THE MOVIE. No, not the little girl from To Kill A Mockingbird, Tim Truman’s 1980s Eclipse comic about an Apache in a postapocalypic U.S.

MORE BLACK PANTHER. I’ve been somewhat underwhelmed (but had extremely high expectation) by Ta-Nehisi Coates Black Panther stories (although the art by Brian Stelfreeze is amazing), but I’m willing to keep reading because I think at some point Coates is going to hit a groove—it’s his first comic, after all. So I’m happy Marvel has renewed the series beyond the initial 12-issue story. The next arc will be titled, “Avengers of the New World.”

DEADPOOL MOVIE PROBLEMS. The sequel to one of the greatest comic book movies ever hit a snag last week when director Tim Miller quit because he couldn’t get along with Ryan Reynolds. Miller, Reynolds, and the writing due of Rhett Reese and Paul Wernick, were all essential elements that made the first movie great, and having Miller drop is certainly not good news. Apparently, the problem was in a much different version for the sequel: Miller wanted to do the opposite of Deadpool and create a megablockbuster, where Reynolds and the writers wanted to continue with the tradition of a stripped down budget focusing more on script and character than FX.

BUSIEK AND BAGLEY BACK ON THUNDERBOLTS. When Marvel first launched the Thunderbolts, exactly 20 years ago next February, it was like nothing we’d seen before, and it was a fresh and surprising book. Since then, other than a brief run by Warren Ellis, Tbolt books have been bad to mediocre. So, as part of their 20th anniversary, Marvel seems to be trying to recapture the magic by going back to to the source and inviting original creators Kurt Busiek and Mark Bagley to cocreate Thunderbolts #10, coming in February. It’s just for one issue, though. Don’t get too excited.

THE RETURN OF THE MUPPET BABIES. Sigh. I have a huge connection to the Muppets, having grown up in a house where our sole income was paid by Jim Henson, but since the master died there hasn’t been much good in the Muppetverse. The rebooted Muppet Movie was good, but the sequel was back to the same old, tired attempts to rehash old magic. Now they’re trying again, with a reboot of the award-winning cartoon “Muppet Babies” in 2018. My expectations are low, and made lower by the fact that the episodes will be 11 minutes each. Why are so many cartoons going in this direction? Are we just surrendering to the short-attention-span Twitter generation? Stop!