Continuing through Deadpool’s journey, and now Marvel is squarely in the “let’s let anyone write about him” camp.  The character continues to appear in X-Force, but now his first self-titled book appears, written by Mark Waid with art by Ian Churchill.

Lots of folks say this book isn’t as good as Wade’s first solo outing, The Circle Chase miniseries, but I beg to differ.  Characteristic of all his writing, Waid tries to make Deadpool more than just a cartoony violent character (but there’s still plenty of silliness and mayhem), and it’s good to read a Deadpool book with a little more heft to it.  Still, Waid himself later said that he didn’t like the character: “Frankly, if I’d known Deadpool was such a creep when I agreed to write the mini-series, I wouldn’t have done it. Someone who hasn’t paid for their crimes presents a problem for me.”

The book is also interesting artistically, as there are different inkers for each issue—actually, multiple inkers per issue—and you can really see the dips and changes in art quality that result.

This is also the first time Siryn appears as Deadpool’s gal. 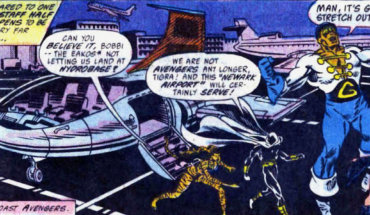 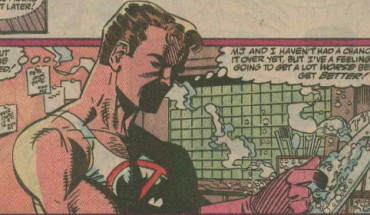