M.O.D.O.K.  Thanos.  The Boys.  Black Panther.  There are times in history when a character must be celebrated on my site.  This is such a time.

Actually, he’s been my oldest son’s favorite character for most of his life–ever since we first played Marvel’s Ultimate Alliance game together on the Wii and Rob Liefeld proved he’s a hell of a guy by letting my then-ten-year-old boy cut the signature line.

As for me, I’m not the biggest Deadpool fan.  But I want to believe.  Some of my favorite writers have worked with him, like Joe Kelly and Gail Simone, and I’ve never taken the time to get intimate with Wade Wilson because, mostly, I hate 1990s comics.  I’m not a huge X-Men fan, I don’t know much about Deadpool before 2006 or so.  So my review of all his appearances will be from the point of view of a novice.

Deadpool famously first appeared in The New Mutants #98 by Fabian Nicieza and Rob Liefeld, where he showed up as an assassin hired to kill Cable.  Much of his core personality was already formed: Wiseass, talks too much, etc.  Legend says that Rob Liefeld loved Marv Wolfman and George Perez’s New Teen Titans, so he and Fabian named Wade Wilson after Slade Wilson, and designed his costume appropriately. 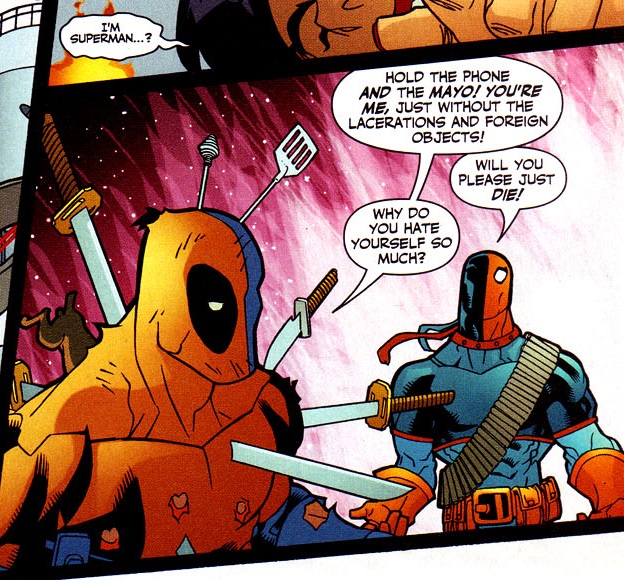 Next, he appeared on a collector’s card in a polybagged X-Force #1 (1991), also by Fabian and Rob, but he himself didn’t appear in the book until issue #2.  I’m going to go out a limb here and say that his appearances in X-Force weren’t all that great.

He’s still pretty much a bad guy, working with Juggernaut and Black Tom, and he’s just a dude who teleports people.  Plus, Rob stops drawing it after the first few issues so we don’t even get his delightfully ridiculous bodies to look at.  Of course, we did get some great artists passing through the book—like Greg Capullo, in an early example of his work.  Still, you just can’t pay me enough (and you pay me nothing) to read all these.  I know, it’s day one and I’m already skipping issues, but come on.

Anyway, through 1993 he’s pretty much an on-again-off-again feature player in Fabian Niciecza’s X-Force, until he gets his own book.  That’s where we’ll go next.