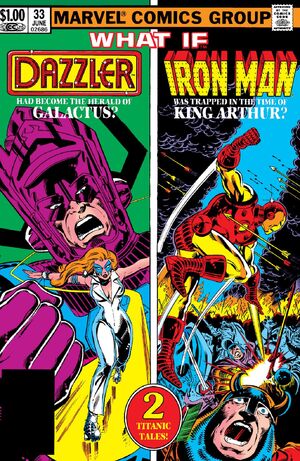 What If? #33 was two stories. Both were decent, neither came true. Since I haven’t been counting back-up stories in my count for how many issues of What If? came true, this only counts as one “No.”

What If? #35 was “What If Elektra Had Lived” by Frank Miller.  It reprinted a lot of existing art with new dialog, but basically it told the story of Daredevil #181 but instead of Bullseye killer her, he dies.  And Matt and Elektra live happily ever after.  Not really.  This one could go either way–on the one hand, Elektra did survive that fight because she was revived by the white ninja Stone.  But on the other hand, she did die–she was resurrected.  So, on a close call, I’m saying no, this did not come true. What If? #36 was “What If the Fantastic Four never got their powers?”  Another great issue from a great creator, John Byrne, but it didn’t come true.

Three truths and a lie!

*I was going to research all the versions of Thing and do a photo gallery for all of you, but I’m too lazy.