List time again! Today and tomorrow, the top 10 comic book sidekicks of all time, according to me. Now, the rules are: They have to have been an actual sidekick—someone who didn’t appear without the main hero, at least at first and for a long time. So Supergirl and She-Hulk wouldn’t qualify. Second rule: They can’t all be Robin. Or even Batman sidekicks. Because for a guy who was supposed to be such a loner, he sure did amass a lot of hangers-on. Final rule: No animals.

And a caveat: These are my personal favorites, not necessarily the most important sidekicks—or even the most relevant. If you disagree with me, drop a comment and tell me why!

We’ll start out, today, with #s 25-10, and then you can come back tomorrow and see the top 10…And then, some of the worst sidekicks of all time!

It’s hard to find Rick Veitch’s comic about sidekicks who serve as commercial products, and I’m going by memory, but as I recall it was excellent. It won an Eisner. But since I can’t do more research, it’s just placing at #25. Interestingly, it’s one of two “teams” of sidekicks you’ll see on this list. Can you guess what the other one is? Less a sidekick and more of a chauffeur, but Moon Knight’s helicopter pilot was a fan favorite. Also, one of the first semi-major gay characters in comics.

Speaking of drivers, here’s Kato. There have been comics about him, and the comics are actually often better than the TV shows, so he gets on the list. Chewbacca doesn’t get on my list, so take this one instead. Sure, nobody thinks of him as a sidekick but the dude used to step and fetch for Thanos. Good times.

AKA “The Seventh Smartest Person in the World.” What was cool about Cho’s period of service as a sidekick to the Hulk was that he did something nobody else ever did. Hulk went through lots of sidekicks and hangers-on, but through it all he resented puny banner. So his sidekicks were never all that smart. And his run with Hercules was terrific, too.

Arthur, AKA The Moth, served alongside the lunatic hero, The Tick. Arthur was more than just a “straight amn sidekick,” though, he kept his bungling, egomaniacal hero out of trouble in the same way 99 always looked out for Maxwell Smart. An appearance by Dr. Strange’s Chinese manservant was always the highlight of Strange’s stories for me. I can’t explain why. He even broke the golden rule of Asian sidekicks by not being a karate expert!

Remember how I said that some sidekicks fulfill a necessary humor function? Well, Deadpool was already funny. Bob is his punching bag, his whipping boy, a character who does nothing but get the crap beat out of him, issue out of issue. If Deadpool was in South Park, Bob would be Kenny.

Sorry, fans, but she doesn’t rate higher than this for me. It’s pretty rare that I read her in a comic and enjoy her. Loved her on TV, but this is a comic book blog—not a cartoon one. At the same time, I love the concept of a girl for Joker. A crooked lid for a crooked pot.

More so than any of the other characters who hung out with Tintin, Captain Haddock was a star. The drunken sailor

deserved a spin off. Written by Garth Ennis. Hey, it’s not too late.

Calvin and Hobbes was a comic, so this counts. We all know that Hobbes was imaginary, just a tool of Calvin’s id, but he seemed so alive to us as readers. In fact, when my son was eight and 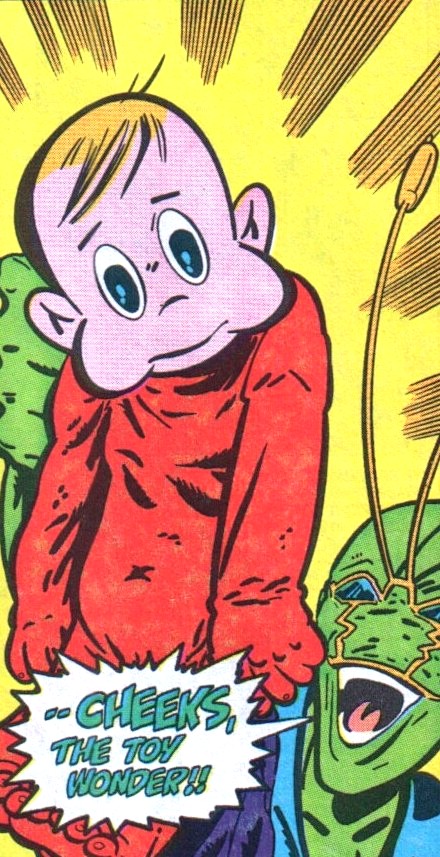 read every single Calvin and Hobbes book over and over, he insisted Hobbes was real and not just a stuffed animal. Oh, and I know I said no animals—but he’s a stuffed doll, not an animal.

Speaking of stuffed dolls, in his first solo book Ambush Bug got himself sidekick: A toy doll that he found in the garbage. I loved this book, and never forgot Cheeks. It was good to see Bug having someone he actually cared about, since other than that he was basically a witless psychopath. Again: I know I said no animals! But Lockheed’s a dragon, not a pet. And he was a great sidekick for Kitty Pryde.

I hesitated before putting Jimmy on this list because he’s not really a sidekick. He’s more like a damsel in distress, or a supporting character. But I remember his solo book titled “Superman’s Pal, Jimmy Olsen.” That sure sounds like a sidekick to me.