This is it, the final post in this series–a list of my favorite single issues of ongoing comic book series.  “Done in ones” they’re mostly called.

I hope you’ve enjoyed reading it and thinking how wrong I am! If you missed anything or just want a recap, click the “Best Single Comics Ever” tag below to see all the posts. Drop a comment and tell me what I’ve missed!

Brian Michael Bendis destroyed the team, which had gotten stale, and brought them back with a lineup nobody ever thought would work.  Spider-Man?  Spider-Woman?  Wolverine?  Luke freakin’ Cage?!?  And yet it turned out to be probably the most brilliant Marvel rebranding since Giant-Size X-Men #1.

I’m counting this because All-Star Superman, while it ended, wasn’t officially announced as a miniseries.  Plus, it’s just amazing.  This was the issue where Superman gives Lois his powers as a birthday gift, and she spends the entire issue side-by-side with him, being a superhero.  It’s a beautiful love story, and it’s also the issue where he arm-wrestles Atlas and kisses Lois on the moon.  It really doesn’t get much better than this.

It’s important to remember that Swamp Thing, when Alan Moore took the character on, was a joke.  He was a lame version of Man-Thing, and he’d been the star of the worst Wes Craven movie ever made.  So rather than rehabilitate the character, Moore completely renovated him—rather than a man who fused with a swamp, Moore made him a swamp that fused with a man.  That single, simple flip changed the character forever—and for the better.  I’d say this is the smartest comic on this entire list.

Gardner Fox and Mike Sekowsky introduce the world to the Justice League of America.  And Starro, the mind-controlling starfish from space.  You can say that this is corny, dated stuff, but Grant Morrison easily could have written this.

“Cap lives again!”  Bringing Cap back from the dead, and reviving a guy whose previous book had been cancelled because everyone hated it, and turning it into a classic.  Quite a feat. “Silent Interlude.”  Widely recognized as one of the most important comics of all time.  Check out this cool article about it here. The best origin story of all time, period, end of debate.  Like the early Fantastic Four issues, the Lee/Ditko years on Spider-Man could also take up many spots on this list.  Such great comics.

Yeah, partly it’s here because it was the first superhero comic of all time–so it’s the most important single issue of a serialized comic book.

But it’s also actually good, even by today’s standards.  It was created as a series of comic strips, which were then reorganized to appear as comic book pages.

And that cover—you can’t beat it.

Dr. Doom, in his first and greatest appearance ever, sends the team back in time and Thing becomes the pirate Blackbeard.

Not only is this the best single issue ever, it’s my favorite comic of all time. 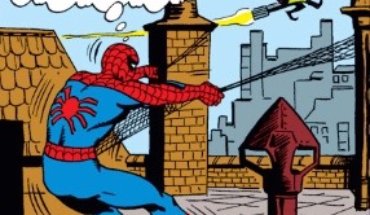