Netflix’s Daredevil show starts April 10, and it’s inevitable that this becomes an opportunity to talk about Kingpin.

Wilson Fisk is a major player in the DD underworld, and he’s also a huge foil for Spider-Man.  In fact, everyone blames Mephisto for the love-it-or-hate-it Marvel reboot of Spider-Man, in which he makes a deal with the devil that erases his marriage to Mary Jane in exchange for saving Aunt May’s life, but it was The Kingpin who set it all in motion.  It was Fisk who hired a hitman to kill Spider-Man, and it was that contract hit that ended up with Aunt May, not Spidey, getting murdered.  And all because Spider-Man teased him about having been in prison.

Such a sore loser.

That’s not one of the ten best Kingpin stories of all time, though.  The owners of that award are these fine folks, below…. 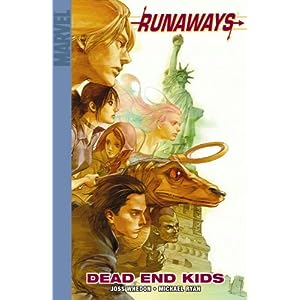 Before Runaways, the only kid-centered Marvel comic worth reading had been Power Pack.  And in a lot of ways, Runaways was to Power Pack what Frank Miller’s Dark Knight was to the Batman comics that preceded it.  Runaways took the kids-with-powers concept to another level, showing children having child-like reactions to grown-up evil.  And when it comes to grown up evil, Kingpin ranks pretty high.  In these issues, he tries to manipulate the kids by promising them sanctuary if they do just one little job for him.  Of course, he loses, but such is the way of the Kingpin.

I know it’s not the best Kingpin story (or the best Runaways story) but I love how it parallels the first appearance of Dr. Doom, with Fisk in the Doom role and the Runaways as the Fantastic Four.   Plus, we can’t have a list with nothing on it but Spider-Man and Daredevil, right?  We need to show some breadth

Otherwise, it would be boring! 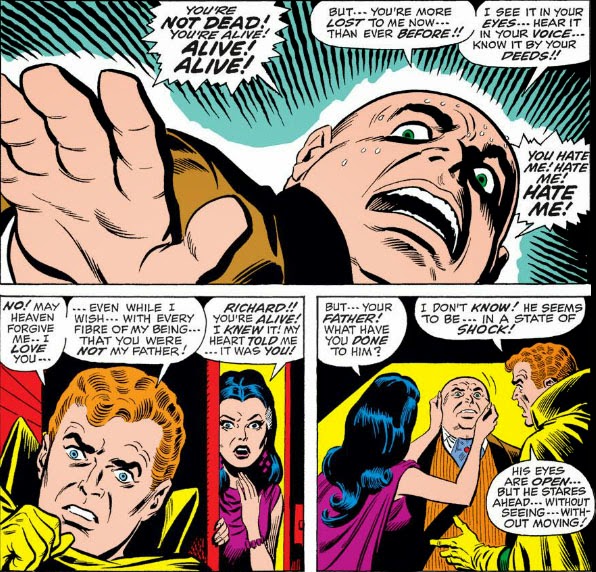 Maybe this isn’t one of the ten best written Kingpin stories, but it’s certainly an important one.  And as cheesy as Stan Lee could be, I like his writing—and I love the art of John Romita, Sr.

In these issues, a new crimelord called “Schemer” comes on the scene to try to topple Kingpin.  From the start, he’s a third-rate version of

Kingpin—which is appropriate, as he is later revealed to be Kingpin’s son (who was believed to have died years before)!  Vanessa Fisk, tries to keep her son’s secret and basically sides with him against Kingpin.  When Wilson Fisk realizes that his son hates him, he goes into a coma.

The effect of family on Fisk’s twisted, hypercontrolling personality would continue to be a major aspect of the character for years to come.

Ann Nocenti and John Romita, Jr.’s run on Daredevil is often overlooked because it focused so heavily on the supernatural and because it was sandwiched between epic runs by Frank Miller and Bendis/Maleev, but it’s a mistake to overlook it.  Take these issues, in which she created Typhoid Mary: A mentally ill mutant of tremendous power and extremely unbalanced emotions.

Mary seduces Matt Murdock into sleeping with her, while Murdock at the time was in love with Karen Page and had finally found a way to settle down with her.  Mary also sleeps with Kingpin, who hired her to go after Daredevil.

I’m pretty sure it’s the only time Daredevil and Kingpin shared a woman.  In fact, I can’t think of another classic hero/villain pair that have swung in this manner.

Back in the day, Marvel put out a terrific anthology series called “Spider-Man’s Tangled Web,” which focused on the impact the character had on the people in his life. Mostly, on his enemies.  And in issue #4 the great Greg Rucka teamed up with the noirish artist Eduardo Risso on a little story about one of Kingpin’s henchmen who is defeated by Spider-Man.  Kingpin isn’t in the issue all that much—it’s mostly about the thug and his family—but he looms over it, haunting every page, and in the end his ruthlessness is evident.

Remember what I just said about irony?  Ed Brubaker and Michael Lark force DD and KP to team-up in order to escape from prison.  When I read these books, I was so disappointed that they went on so fast.  I could have read a hundred issues about Daredevil in prison.

But then, I’ve seen every episode of Oz at least three times and I never miss Sugar Hill: Escape From Women’s Prison when it comes on TV.

Spider-Man throws his costume in the trash and Wilson Fisk decides to make his move.  Kingpin premiers as a large—but not necessarily fat—dude with a pimp suit and diamond-headed cane.  Why does he need a cane?  Nobody asks.

Of course, his early attempt to be the crimelord of NYC is foiled by Spidey, but it’s obvious even here in this first appearance Stan Lee and John Romita, Sr. have created a villain destined for greatness.

When you think of PunisherMax, you think of Garth Ennis.  But you should also think of Jason Aaron, whose run on the title is extremely underrated.  Like Ennis, Aaron focused more on the villains than on Punisher himself, and the main character in his run is really Kingpin.  Teamed up with Ennis’ former art partner Steve Dillon, Aaron focused on how Kingpin became the leader of the criminal underground.  MaxKingpin is married to Vanessa and they have a son, and his love for family (or at least what passes for love when you’re a sociopath) is the focal point for the narrative.  At the same time, he squeezes someone’s head like a vice until the dude’s eyes literally pop out.  There’s the inevitable “Wilson Fisk was abused as a child” trope, but trust me, Fisk is not your average victim.  I’ll leave it at that and let you read for yourself.

It’s a ruthless story with ramifications that extend throughout Aaron and Dillon’s brilliant run on this title.

It’s hard to imagine now, when Kingpin rarely appears in the pages of Spider-Man, but the crimelord didn’t even meet Daredevil until the 1980s.  Frank Miller’s run on Daredevil was not only career-defining for Miller, it was character-defining for both DD and The Kingpin.  Bringing the two lovebirds together was brilliant: A family-loving criminal mastermind who has great physical strength but uses his mind above all else, and hides behind the identity of a humble, unimportant spice dealer, versus a friendless, family-free superhero with a great mind who instead uses his physical senses and abilities, and hides behind the identity of a brilliant, blind lawyer. 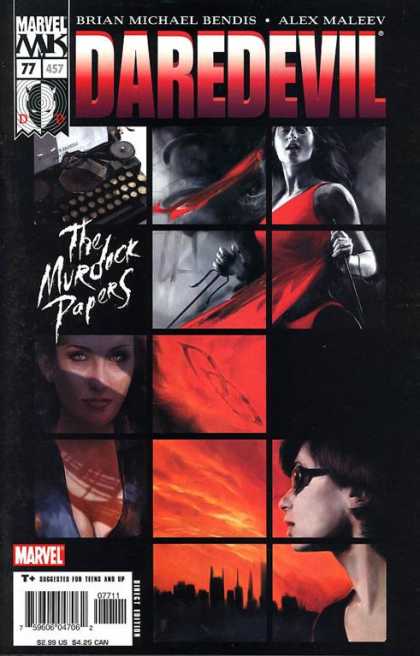 There’s so much rich material here: KP’s wife betraying him and dragging him back into crime (even though she says she can’t love him if he’s a criminal), but Fisk still loving her in spite of all reason; Kingpin’s employing Bullseye, turning him from kind of a silly little gimmick villain into one of the scariest Marvel villains of all; Kingpin’s blinding ambition; and that brilliantly ironic ending that I won’t spoil if you’ve not read these issues.

This is where Frank Miller’s Daredevil run really gets going—and it never decreases in speed, never declines in quality.

Brian Michael Bendis and Alex Maleev’s run on Daredevil was Kingpin-heavy (pardon the pun), and the story is so intricate that it’s hard to bust it out into story arcs, but if you have to, this end-of-the-story wrap up is a great place to do it.  Daredevil tells the government he has “papers” about Daredevil, and uses them as leverage to free himself from prison as the FBI’s guest.

It ends with both Kingpin and Daredevil locked away in the same prison, and Bendis and Maleev leave this mess for someone else to deal with.  That someone was Ed Brubaker, who did a bang-up job (see above).

In just a scant five issues, Frank Miller and David Mazzucchelli created one of the single best comic book stories of all time, which I’ve written about again and again and again.

But one aspect of this story that I’ve not focused on is Kingpin.  The story is really about Matt Murdock’s identity being sold out from under him to his worst enemy, forcing him to deconstruct his secret identity (not his superhero identity, which he’d deconstructed several times before) and emerge reborn.  But Kingpin’s story is equally important.  It’s one of the few stories where Wilson Fisk’s skills as a strategist are in the forefront: He closes off each of Murdock’s options before Matt can get to him; he recognizes the proper use of lesser-valued pieces, like Ben Urich, which can be used to position the more powerful ones, like Nuke.

Plus, Kingpin’s arc in these issues mirror’s Daredevil’s: By the end, he has ruined his own public identity and has gotten for himself the outcome he’d been planning for his worst enemy.