A “haunted comic” is the key to the multiverses coming together in a sort of Secret Wars(ish) tribute to the many different types of comics DC has produced since the dawn of the superhero.  Multiversity is fun—it’s a typical Morrison historical orgy, reviving offbeat characters like Captain Carrot and creating new and fascinating ones.  I had high expectations for this book, and while it hasn’t lived up to the nearly 10 years of hype it got prior to publication, it’s still a damn fine superhero comic.  There’s a lot there that could be the source of imaginative comics for years to come (but it won’t be—DC has never been able to mine the ore of Morrison’s worlds).  And this will be one of Morrison’s final projects for the big two, so smoke it while you got it.  Last Year: N/A

Comic book biographies are hard to do, and I’m not a wrestling fan, so Box Brown’s well-researched story about one of wrestling’s biggest (ahem) legends had to be great to get me to consider it for an end-of-the-year entry.  And it was.  Last year: N/A (one-shot) 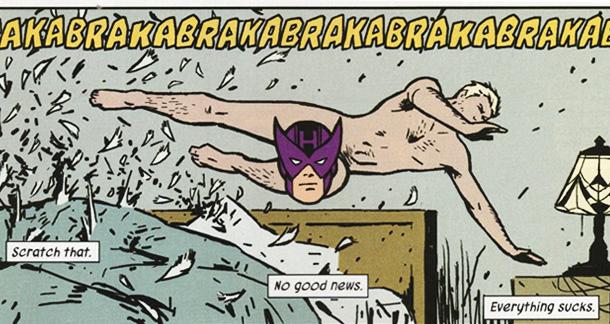 Constant creativity, constant surprises, and a cavalier “this doesn’t matter so I can do whatever I want” attitude infuse Hawkeye with a freshness and charm you don’t usually see in comic books.  Great stuff, sad to see it end.

Whether pre- or post-New 52, Scott Snyder’s Batman has been a solid, reliable book—but one I often forget reading.  This year, though, Snyder swung for the fences and knocked it out of the park.  (Get it—a baseball reference for “Bat” man?)  Zero Year was terrific, and Batman #36 (the one where he fought Batman) was the single best non-Grant Morrison Batman comic I’ve read in ten years.  And it doesn’t hurt to have an artist like Greg Capullo design a Joker for the 2010s that is truly horrifying.

The bloom came off the rose for me this year in Daredevil, but only a little.  I’ve loved Mark Waid’s work with the character, but after he moved to San Francisco I suddenly found myself liking him less.  I’m not sure why.  I love SF.  Yet when he pulled out the “Children of the Purple Man” story in October, I remembered everything I loved about the book.  So it lost its way a little in 2014, and shot down in my rankings (Waid’s DD has been in my top five for the past two years), but it ended strong.  Waid and artist Chris Samnee are leaving the title next year—I can’t wait to see how they wrap it all up.  Last Year: #3.

Hit “next” to continue!