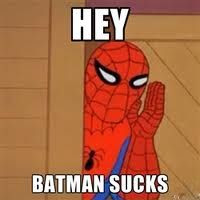 Last month, Rocket Raccoon set all kinds of sales records because 100k copies were purchased as part of a tie-in with a giveaway.  This month, sales were down from last month’s artificially inflated numbers, and Rocket couldn’t hold on to his audience—he rocketed down from #1 to #17.  Still, that’s a respectable number for a second issue about a character many people know only from the movies.  So, I’m still calling that a “win” for Marvel.  The book is wonderful, by the way—it’s everything comics should be: Wild and crazy, visually far beyond what movies or TV can deliver, a solid story, funny, cute, and dramatic.

Overall, August 2014 was slightly better than August 2013, and in an industry that in many ways seems to be slowly dying, that’s good news.

The ten best-selling comic books were:

1.  Batman #34 (the issue where Gerry Duggan came over from Marvel’s Deadpool to do a fill-in that was really, really bad)

5.  Superior Spider-Man #32 (the one Dan Slott didn’t write that did little more than set-up Spiderverse, and really should have been a free giveaway)

7.  Harley Quinn #9 (I guess cosplayers spend money on comics, because nobody else could read this crap)

Of those books, only a few were good, none were great.  Multiversity was a lot of set-up, but it was terribly familiar—lots of heroes meeting in a big room, something is going to destroy all the universes…I trust Grant Morrison is going somewhere with this, but we waited almost a decade for DC to finally publish this, which is to be his masterpiece and final corporate job for possibly ever, so I really wanted to be blown away.  I wasn’t.  Good, but not greatly good.

What’s really interesting to me is if you go below #10 you find that #s 11 through 20 are all Batman related, except for three books: All-New X-Men (#12), Rocket Raccoon (#17) and Superman (#18).  So, Batbooks take up 50% of the top 20, and represent 10 out of the 11 DC books on the list.  Compare to Marvel, whose entries include a few Spideys but also Guardians and X-Men.  I think that says something for the versatility of DC’s line versus Marvel’s.

On the Graphic Novel front, we suprisingly have no Walking Dead, and Saga didn’t crack the top 5!

1.  Thanos: The Infinity Revelation (I didn’t love this book, but I love Jim Starlin and it’s great to see an ORIGINAL graphic novel in the top 10, versus a book that reprints comic book issues)

4.  Trillium (Jeff Lemire’s Vertigo title didn’t work for me, but I appreciated what it was trying to do so it’s nice to see it in the top 10)

Expect Walking Dead to rise and dominate once again in November after the TV series’ season starts.