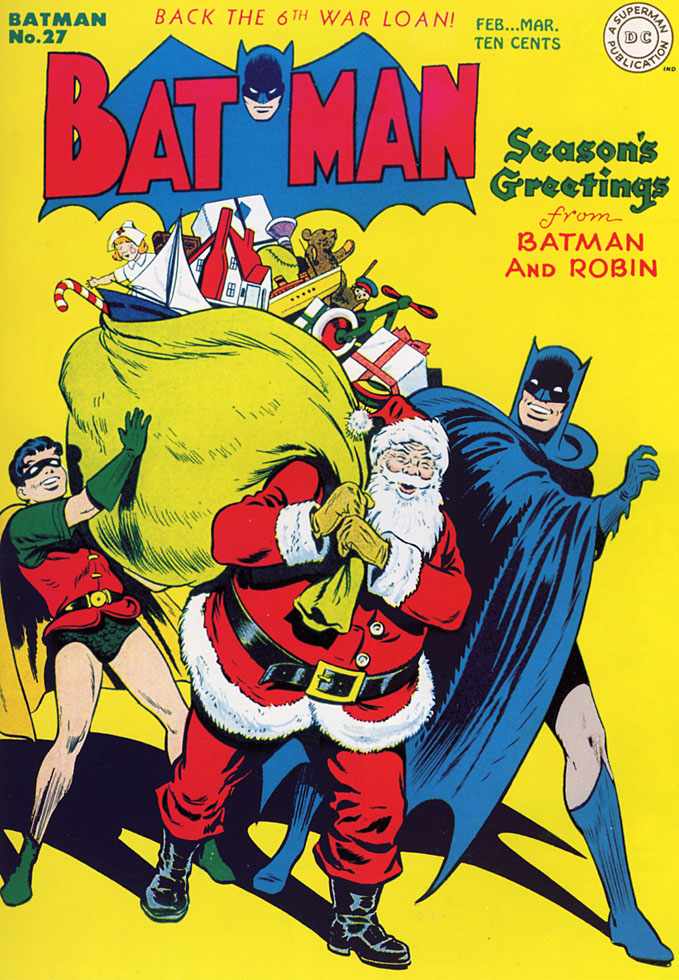 Batman #27 was the best-selling comic. No, not this Batman #27. But I would totally love to read this issue.

The first month of 2014 found only one #1 in the top 10 comic books sold (according to Diamond Comic Distributors): Avengers World, which came in at #3. Topping the list were Batman and Detective Comics’ respective #27s, with the rest of the list being the usual suspects…Except that Harley Quinn #2 is still right in there in the top 10.

Imagine that: A girl (and villain) centered book in the top 10! I can’t say the book really resonated with me personally, but I love that it’s there. And also noteworthy: Detective #27 cost a whopping eight bucks—and still cracked the top 10.

With a “second issue” in the top 10, it’s worth nothing that last year’s 10 bestselling comics were one issue of The Walking Dead (#115), and nine #1s from DC/Marvel. But the issues after #1 of all those series, which Justice League of America, Superior Spider-Man, Superman Unchained, and Guardians of the Galaxy, sold about the same as the last-issue-before-the-new #1-issue. This can mean a couple things: First, #1 issues only really sell #1 issues, so if a publisher is looking for a spike, it’s good tactic, but if they’re looking for overall increases in readership, it’s not working. Second, if there are people who buy #1 issues because they see them as a way to start reading a new series from the beginning, then just as many loyal readers of the “old” series are dropping it when it reboots.

I think there’s one conclusion to be made: Branding series as “new” for each major arc or creative team is a way to create an episodic, trade-paperback-like reading experience. But as a sales tactic, it seems they could create sales spikes just as easily through other mechanisms, like “event” books and spin-offs, stunts (e.g., the Obama issue of Spider-Man outsold every other comic that year), variant covers (DC’s 3-D covers last year sold like gangbusters), etc. That said, I don’t begrudge anyone trying to sell more comics—whatever it takes, guys—but you have to admit: It’s hilarious that all the #1 issues were bested by a #115.

MS. MARVEL. And speaking of #1s…The first issue of the first mainstream Muslim hero was both critically praised and the bestselling issue on Marvel’s direct-sales digital app. That means it’s beating Wolverine #1 and Loki #1. (I have to note: Taking away Wolverine’s healing factor and then putting him a suit of armor kinda defeats the whole purpose of it all, doesn’t it?)

On a personal note: I read this issue and it’s terrific.  A perfect (yes, perfect) “origin” book that has the same story beats as the greatest origin comic book of all time (Amazing Fantasy #15) but is informed by the greatest re-telling of an origin story of all time (Bendis and Bagely’s revamp in Ultimate Spider-Man).

Anyway, good sales on ComiXology are a good indicator that when Diamond releases its figures for the month, Ms. Marvel will be fairly high on the list. We’ll see if (ahem) Ms. Marvel has legs.  And speaking of legs, look who used his to walk away from Marvel….

JOHN ROMITA, JR, GOES TO DC! No name is more closely associated with Marvel than Romita. Both Sr. and Jr. have almost exclusively worked for the publisher, and neither has ever (to my knowledge) worked on anything for DC. So it’s big news that JR JR will be drawing the main Superman comic for DC this summer. Equally as important, Klaus Janson will be doing the inks. Who will write the scripts for this powerhouse team? Geoff “I’ve been phoning it in for years” Johns. Still, this has to be a big blow to Marvel—Romita is one of the biggest, most Marvel-associated names in comics. And speaking of Superman…

Everything old really is new again. Look at this news post: Batman #27. Ms. Marvel #1. Death of Superman. I could have used “old covers” for practically every story on this list!

THE DEATH OF SUPERMAN 2. DC’s Super-Event this year will be Doomsday and The Death of Superman. See, this is one of the big problems with the new 52: We’ve already seen this, we’ve already been there. I have no interest in revisiting it. I do have to eat my words about one thing, though…

BATMAN BY SCOTT SNYDER IS GOOD. Now that the Year Zero first arc is done, I went back and re-read it and…It’s actually damn good. I was wrong. I think it’s just hard to follow as a monthly serialization. And speaking of serialization…

PREACHER ON AMC. It’s official. Seth Rogen is part of a team developing Garth Ennis and Steve Dillon’s “hard R” rated Vertigo comic for an AMC series. If you’ve never read it, trust me when I tell you that if Walking Dead makes you squirm, Preacher will make you projectile vomit. I have no idea how they’ll bring this to TV, but I do know that a long-form format will be better than a one-shot movie. In other long-form TV news…

DMZ TV. Members of the “Mad Men” creative team are working on a pilot for Syfy of Bryan Wood and Riccardo Burchielli’s 72-issue epic about a journalist in a version of Manhattan that’s a lot like the one from John Carpenter’s “Escape From New York.” The Vertigo comic was critically praised and had a realistic spin on the “nihilistic future” genre. I liked it, but I always thought it would make a better TV show than comic. Maybe I’ll finally get to see if I was right. One thing is for sure, they couldn’t tell this kind of extended, decompressed story in a movie. But some things are better as movies, speaking of which…

GOTHAM HAS IT’S JAMES GORDON. The TV police procedural about Gotham City before Batman came along (i.e., when it was just a regular city) will star Ben McKenzie (of Southland and the voice of Batman in the animated Batman: Year One straight-to-video movie). Is anyone excited about this show? Someone close to the project told The Hollywood Reporter that: “We will follow Bruce Wayne right up until the point where he gets interesting.” And they thought that was a good thing!? It seems like DC is, once again, failing to learn from Smallville: We want the capes, not the characters. Marvel doesn’t seem to have learned that, either, based on its TV show, but as for its movies….

AVENGERS 2 HAS VISION. The voice of Jarvis in the Iron Man movies, Paul Bettany, has won the role of Vision in the next Joss Whedon fists, hammers, shields and blowing upping epic. Makes sense: Tony Stark “destroyed” Jarvis at the end of Iron Man 3, so he’ll likely jump into a robot body. Also makes sense that he’d be a little pissed off at Tony’s rejection, so making him an ally to Ultron (at least in the beginning of the story) would work. Plus, this paves the way for future robot sex with Elizabeth “Scarlet Witch” Olsen. Speaking of non-human superheroes….

THE LEGO MOVIE. It’s got Batman, so it’s a comic book movie, right? It kicked butt at the box office opening weekend ($70 million!), and I plan on seeing it soon….Maybe next weekend, because God knows I have no interest in the Robocop reboot. And last but not least…

CHEW/REVIVAL CROSSOVER. Image Comics will cross its popular “Chew” comic (by John Layman and Rob Guilory) about a detective who eats stuff like brains with the newer “Revival” horror comic by Tim Seeley and Mike Norton about a town where the dead are revived but they don’t eat stuff like brains.