Marvel is now in the business of cancelling and reviving series all the time.  Not a month shall go by without a #1.  Some books, like Hulk, are being cancelled in one month and brought back the next one with the same writer.  I’m not complaining—it helps me identify whether I want to read a particular arc, and it’s consistent with Marvel’s philosophy from way back in the Stan Lee days that “every comic is somebody’s first comic,” so every comic should be a jump-in point.  More details on some of these cancellalaunches below (at least the ones I’m interested in), but I wanted to take extra time for my favorite: X-Factor.

Peter David is back as the writer, with regular artist Carmine di Giandomenico.  The prior volume suffered from frequent artist changes (and fill-ins by, frankly, terrible artists).  Let’s hope Carmine is in for at least 6-10 issues.  The new team is corporate—kind of like that commercial iteration of New Warriors—and consists of Polaris, Quicksilver, Gambit, Warlock, Cypher and Danger.  No Madrox.  No Layla.  No Rahne. They were my favorites from the last X-Factor.  But Peter David is, in my opinion, one of the most underrated series writers in the business—so this is on my “must read” list.  Issue #1 was terrific: Part mystery, part corporate intrigue, all character driven…It’s exactly what I’ve come to expect from Peter David.  And CdiG’s art is perfect for this book: It’s realistic in a noir-ish way, enhancing the “mystery” feel of the title, but he’s capable of some “big” panels, too, busting out with action and being all explosion-y.
I love this book.  Thank you Peter David!
And now, other news…
STAR WARS COMES TO MARVEL.  Disney has decided that owning the Star Wars movies means moving the comics from Dark Horse to its own, in-house comic book creators: Marvel.  I haven’t read a Star Wars comic since the 1970s, when they were Marvel anyway, but I understand that Dark Horse has been doing a great job with the books so fans of the franchise 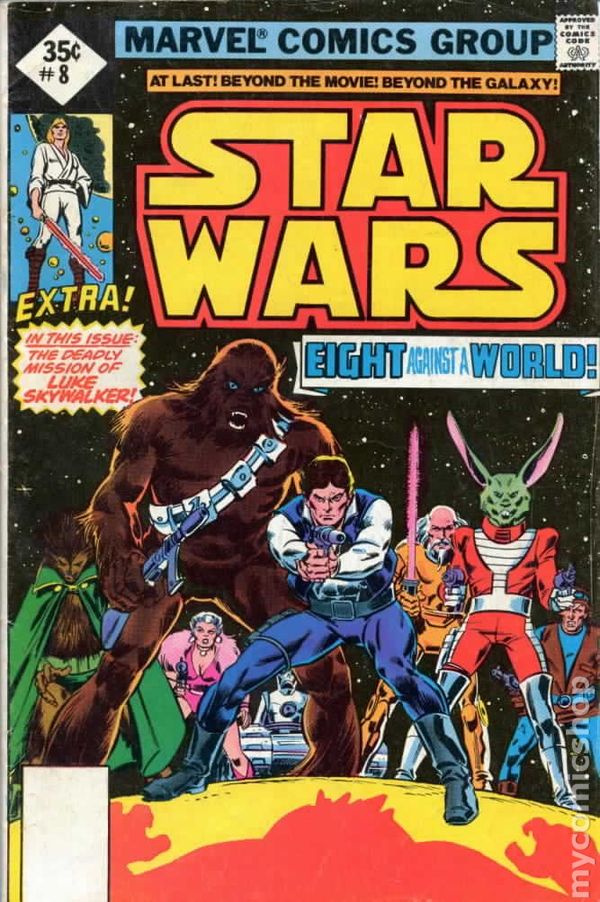 might be sad.  But think of it this way: Now Rocket Raccoon can meet Yoda!
MARVEL’S 2014 EVENT: “ORIGINAL SIN.”  It seems like everything at Marvel is an “event” these days.  (Which is why I always enjoy books like Spider-Man and X-Factor: Not many events corrupt the creators’ vision and storyline.)  This year, they’re kicking it off by killing Uatu, The Watcher.  I’m not too happy about that, but if they handle it well it could be a neat little “space mystery.”  I just wish they didn’t have to kill Uatu to do it.  He was always one of those nice, underused characters that was always a welcome sight.  Jason Aaron and Mike Deodato will be the team behind the 8-issue, biweekly series that begins in May (with a “zero issue” in April from Mark Waid and Jim Cheung).  Nick Fury (the real one, not the lame black-kid-with-eyepatch-who-isn’t-Ultimate-Nick-Fury-but-is-still-Nick-Fury-because-of-the-movie Nick Fury) will head up the investigation. Oh, and you want new #1s?  Don’t worry.  Marvel promises lots and lots of tie-ins.
HULK #1.  And speaking of #1s, Marvel is finally pulling the plug on Indestructible Hulk.  I love Mark Waid, but his “Hulk as armored SHIELD agent” comic never really clicked.  Marvel is letting him try again with Hulk #1, where Waid will be paired with artist Mark Bagley.
MORE STUMPTOWN!  There have been a couple really good miniseries about Dex, the lowlife, good-hearted lesbian at the center of Greg Rucka and Matthew Southworth‘s detective comic book, and Oni Press promises a third installment toward the end of the year.
INJUSTICE: GODS AMONG US.  The DC digital-only book, and one of the best comics of 2013 [LINK TO MY BEST OF 20313 POST] has with the same writer (Tom Taylor) for a second season.  This time, the story will go beyond Earth into outer space. I can’t wait.  Injustice is probably the best-selling digital comic ever—nearly 2 million issues sold.
DOOP #1?  Remember when I said X-Factor #1 was the “one” I was most excited about?  (If you don’t remember, I just said it, right up top.)  Well, X-Statix creator Peter Milligan writing a new Doop series is a close second.  It’ll just be five issues and will take place during the Battle for the Atom miniseries.
IRON FIST #1.  Daniel Rand hasn’t had his own book since Brubaker, Lark and Fraction’s legendary “Immortal Iron Fist” saga (I don’t count the last issues of the series, which went out with a whimper not a bang by a different creative team), but he’ll return in March under the singular vision of Kaare Andrews.  The previous work of the writer/artist hasn’t been without controversy, particularly his Dark Knight-ish take on Spider-Man titled, Spider-Man: Reign, but his work with Zeb Wells on Doctor Octopus: Year One is one of the better comics of its kind (it won a Schuster Award in 2004).

IMAGE EXPO NEWS.  The only comic publisher that has its own comic-con, Image announced many exciting new projects for the coming year ranging from bizarre horror to slam-bang superheroics:
DEADPOOL IS GETTING MARRIED.  Normally, weddings are a good spot to put on water skis and sail over a shark tank, but Deadpool jumped long ago—during the last issues of Daniel Way’s run.  But sales are still good.  So it’s going weekly starting this month, side-by-side with an internet-only digital comic, all as a build up to an April 1st wedding issue (#27).  And yeah, I’m sure the Fool’s Day release date is intentional.
AMAZING SPIDER-MAN #1.  The title is coming back in April, and the credits say it will be by “Superior” team Dan Slott and Humberto Ramos.  Of course Marvel’s not telling if this means Peter Parker is back, or whether Superior Spider-Man is ending, but it seems about time.  The Otto Octavius identity is unraveling, and the story is starting to wear out its welcome.  It’s still a great book—one of the best Marvel titles out there—but it’d be good to end it before we have a chance to get sick of it.  And on that note, I’ll end before you all get sick of me!
Comic Book News, Grant Morrison Sucks
Tweet Pin It