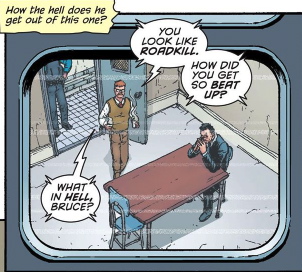 Seven plus years in the making, this is how Grant Morrison’s Batman ends.  Gotham is on the brink of explosion.  Damian is dead.  Batman is wanted by the GCPD.  How will he get out of this one?

The influences of the recent film trilogy are evident here, and clearly intentional.  Like the movie, a long, brooding story ends with a huge knock-down-drag-out full of explosions and mayhem.  Hell, the final word in the comic book is “Rise!”

Morrison has said how much he admires Christopher Nolan’s films but, more importantly, he appears to be connecting on an artistic level.  Like them or hate them, there is no denying that Nolan’s films have a broad theme and a progressive character arc that logically takes Batman from inception to retirement.  So, too, does Morrison’s comic book epic.

And now that Nolan is done, someone else will reboot Batman and start all over–as if Nolan’s films never existed.  And so, too, is Scott Snyder erasing not only Morrison’s work but Frank Miller’s seminal, career-defining work on Batman: Year One.

Perhaps one of the saddest things about this last issue is the effect on Batman, Incorporated.  It was announced at the end of a triumphant, shattering run of Batman and Robin in which Morrison replaced Bruce with Dick and Dick with Damian, and made the DCU a better place for it.  Not so, Batman, Inc.  Unlike Damian Wayne and Dick Grayson’s Batman, who appeared all over the DCU, I don’t think any other DC comics even mentioned Batman, Inc.  Yeah, there’s that Batwing book but nobody’s reading it and it doesn’t tie in with anything.  So in this final issue of the series, Morrison has Bruce Wayne “quit” (for about a page) as Batman and fold his international organization after being told by Kathy “Batwoman” Kane to butt out of international affairs and stay in his Gotham City foxhole.  I can’t say with surety, but I’d bet anything that this is a reflection of Morrison’s view of the New 52.  He had a grand vision to transform Batman for the 21st Century into DC’s true flagship character.  The Nolan films only encouraged that plan.  And then Geoff Johns and his ilk decided to destroy everything, and suddenly there was no room for the gradual, decompressed character change Morrison had been engaging in for seven years.  Instead, he was forced to turn the character over to fit Scott Snyder’s grossly inferior vision. 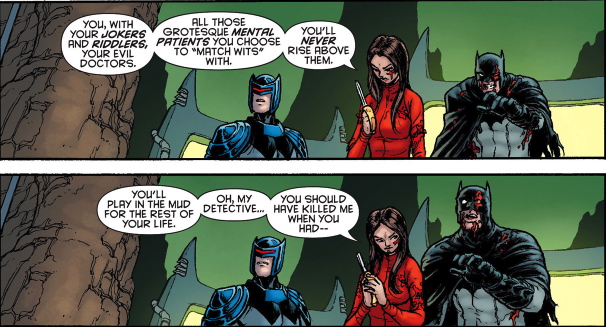 It’s as if Morrison recognizes that no matter how well he writes, or how brilliantly he develops Batman, as soon as he’s done Bruce Wayne will be back in the cowl matching wits with the same old villains. 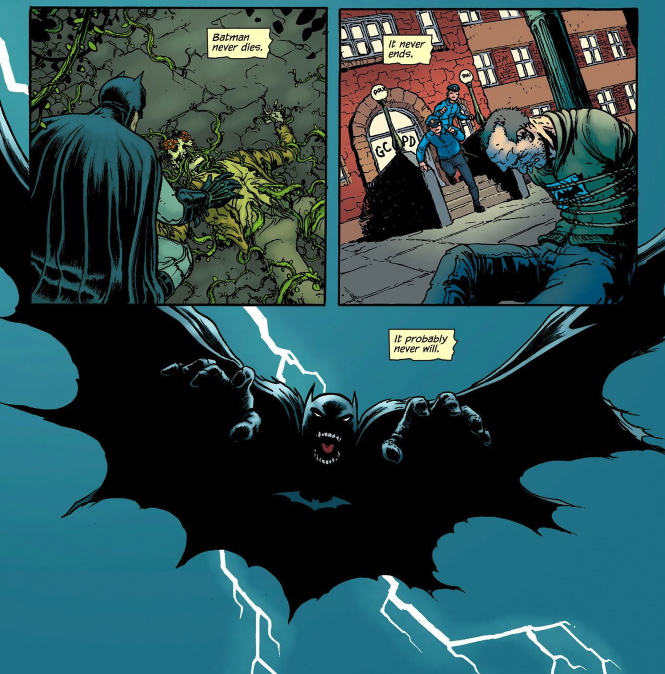 But Morrison doesn’t appear to be bitter about it.  He makes lots of connections to what Snyder is doing.  He’s more matter-of-fact, almost Zen about it.  Enlightened.  Just like his hero, who proceeded through the steps of the Goat Herder to recognize and accept his own place in the world.

There are many who will dislike this issue for not having enough of an ending, or for not including Batman’s greatest foe, The Joker.  But all of Batman, Inc. volume 2 has been about the Ouroboros–a snake eating it’s own tail.  A circle that consumes itself.  Morrison makes the circular nature of his story clear in many ways: Both the first and last issues of Batman Inc. volume 2 show James Gordon arresting Bruce Wayne (although there are some continuity errors—Bruce is completely beat up in #13, but not #1).  The first arc involved mutated versions of man bats and Batmen, as does this last issue.  In this regard, having the book end with more of a whimper–and a promise of more of the same to come–makes complete sense.  By showing us empty graves, Morrison forces us to acknowledge that Talia and Damian will be back, even though we’ve not had any time to accept their deaths. 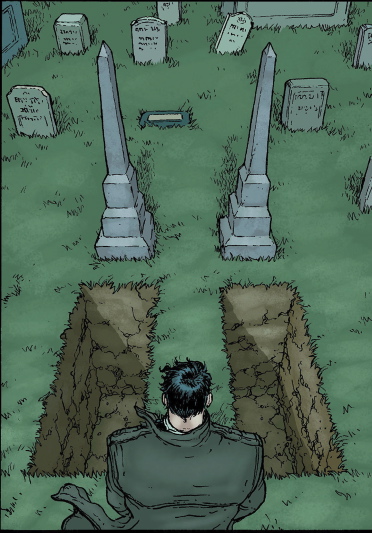 A final word, about the “hole in things” that Dr. Hurt mentioned in his first appearance, in which he said that by being a bad guy, he was the hole that could never be filled: There will always be villains.  The words rang through Batman’s head during his journey through time, such that it started to seem as if Bruce Wayne was the hole in things: The hero, not the villain, was the one that could never fit.  But then he traveled through time and insinuated himself everywhere.  Therefore, in this last issue, we do believe there always has been, and always be, a Batman.  But there will always be villains, too.  The empty graves are both Damian and his mother: The hero who gave his live to save Gotham, and the villain who killed her son(s) trying to destroy it.

And so Morrison says goodbye to Batman and, soon, to DC Comics and all superheroics.  At least for a while.

Will DC be recycling Talia and Damian soon?  Sure.  I’d bet within the next 12 months.  But one thing is clear: Morrison won’t be.  He’s done. 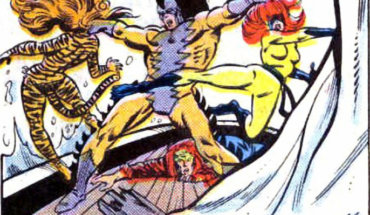 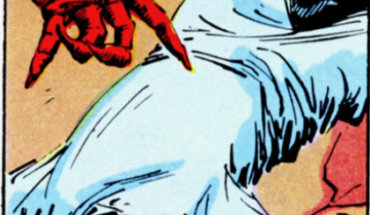