The “Batman & Son” storyline started with quite a bit of hint-dropping and foreshadowing.  We never learned why there were two Batmans, or why one had a gun.  And we don’t here, either.  Part of Grant Morrison’s unusual uniqueness as a comic book writer is his use of prolonged suspense.  He is content to make you wait for resolution for months—even years.

Instead, this issue starts off with the introduction of Jezebel Jet at a pop art show in England.  (Yes, we’re seeing the infancy of Batman’s international corporation, which he would form when he is “resurrected” after The Return of Bruce Wayne.)

Morrison uses this as meta-irony, with Bruce saying “all this comic book stuff is way too highbrow for me,” something his writing had already been accused of.  Morrison, via the expert drawing hand of Andy Kubert, uses popart obviously based on the work of Roy Lichtenstien to tell a comic-book story behind the story in the actual issue.

I don’t think I’ve ever seen anyone else who’s done something quite like this.  I’m sure it was Morrison’s idea, but I wonder if Kubert contributed to it.

Last post, I talked about the history behind this arc, and included a seemingly random panel where Batman fights a leopard.  But it’s exactly that kind of weird, 1966-Batman type stuff that Morrison loves to play with. 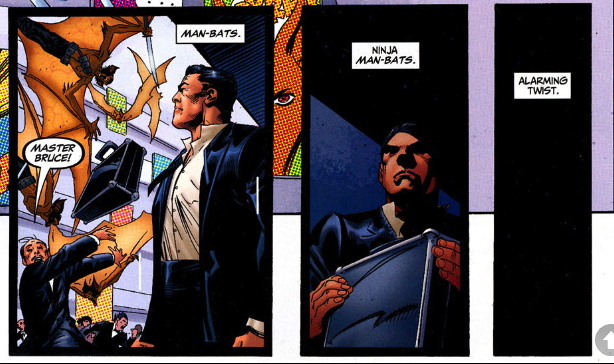 Other interesting note: Alfred is reading Artemis Fowl, a series of novels about a precocious 12-year old with mad detective skills, in a book that introduces a 9-year old boy, Damian Wayne, capable of kicking Red Robin’s ass.  Morrison loves to link to existing literature as a way to supplement his own narrative…

*Actually, Damian wasn’t created by Morrison—he was created by Mike Barr way back in 1987.  Mike Barr is probably best known for his run on Batman and The Outsiders, and he was a pretty influential creator back in the 1980s, and the Son of the Demon graphic novel is recognized as one of the best Batman stories of all time, yet this character—Batman’s son, no less—remained pretty obscure. Mark Waid made use of him in Justice League: Kingdom Come (his villain identity is “Son of the Bat” or “Ibn al Xu’ffasch,” and he gets it on with Starfire and Robin’s daughter.  But this part of his chronology is largely ignored by Grant Morrison.  Which is ironic, because Grant makes use of just about every other piece of Bat-history.  (Actually, I’m pretty sure Kingdom Come is an alternate universe, anyway.)

But speaking of the Red Robin asskicking, that happens in this storyline as well.   And it’s the most brutal Robin beatdown since Joker killed Jason Todd…And yet Robin was so polite! 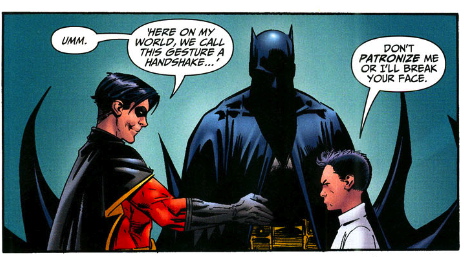 The very last frame of this storyline is Batman standing on the shoreline, watching the burning wreckage in which he believes that Talia and Damian have died.  It looks exactly like the last frame of Batman R.I.P., in which we are led to believe that Batman has “died” in a fiery crash, except that there it is Dick Grayson watching his father burn rather than Bruce Wayne watching his son burn.  I’m sure there’s something deep there, I’m just not exactly sure what it is.

But, as Bruce says during his visit to the art show in this very arc: “There’s a message here somewhere.  I know if I just stare hard enough…”

Next: The Three Ghosts of Batman 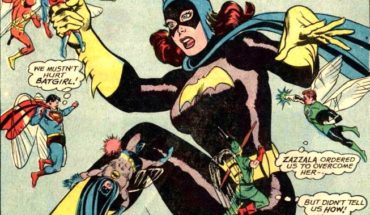 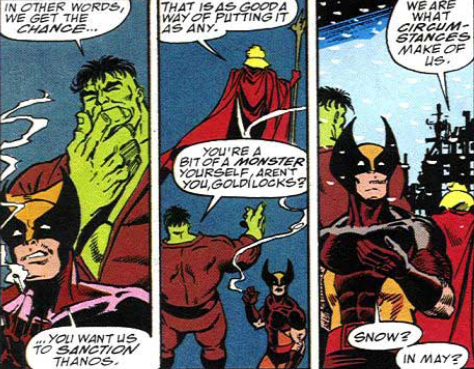