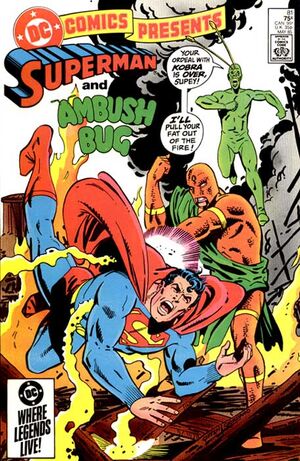 Announcing a new feature: Great team up comics.  Marvel Team Up.  DC Presents.  The Brave and The Bold.  Marvel Two-In-One.  Mostly, these comics were average, or fine for their time but not great.

But occasionally, they were a blast.

So, if you click the tag “GreatTeamUps,” you’ll see posts on these great issues.  Today: DC Comics Presents #81, Superman and Ambush Bug.

Written by Keith Giffen and Robert Loren Fleming and drawn by Giffen, It was a rocking joyride of typical 1980s Giffen madness that started with red kryptonite.

Bug actually first appeared in DC Comics Presents #52, but it really was this issue that clinched the character.

He switches bodies with Superman, and then they fight a really lame DC villain….

You gotta love that 4th wall breaking.  Giffen was always an expert at it.  The book is easily the best DC Comics Presents issue ever, and well worth diving through the dollar bins for.  Every page is hilarious.