Dan Slott. His name is now spoken in harsh whispers, and he is one of the few comic book creators to have received (and reported to the police) death threats in retaliation for his own murder crime: The death of Peter Parker. Or, more precisely, the “death” of Peter Parker.

He’s been writing comics for about ten years, with a renowned run on She-Hulk and a record-long run on The Amazing Spider-Man, during which time he ended the series. He got started, interestingly enough, writing comics for kids: Ren and Stimpy, Looney Tunes, etc. And this child-like joy, and relatively easy-to-follow plotlines, continue to characterize his work today. He has ventured a few times into darker places—Arkham Asylum: Living Hell, e.g.—but mostly his work is eminently accessible for all ages. That’s what makes him a perfect writer for the Spider-Man franchise, versus, say X-Men. (Although I’d love to see X-Men return to the days when it was more fun than mopey.)

My favorite Slott comics, after the break and this caveat: When you spend years and years writing about one character, as Slott has several times (with She-Hulk and Spidey), there are bound to be some duplications in your top ten list. I tried not to make this a top ten just about Spidey, but I easily could have. Slott’s Spider-Man work is easily the best writing he’s ever done, and it’s some of the best Spider-Man writing of all time, to boot. 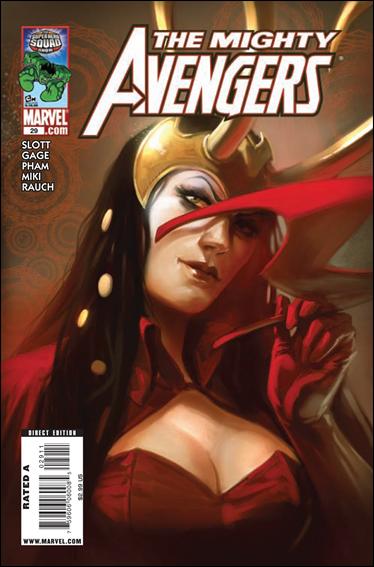 There used to be one book titled “Avengers.” (For a while in the 1980s and 1990s there was also West Coast Avengers, but we’ll ignore that because it doesn’t fit with my narrative.) Then, Brian Michael Bendis blew up that team (literally), ended the title, and gave us “New Avengers.” It was really cool. Then the Civil War happened, Marvel saw that having only one Avengers monthly was leaving lots of money on the table, and boom! There were Avengers Initiatives, unadjectived Avengers, Young Avengers…Here an Avengers book, there an Avengers book, everywhere an Avengers book. Bendis handed “Mighty” off to Dan Slott with issue #21 and Dan immediately made the book his own. It became a story about Hank Pym’s redemption, and really felt like a standalone book—despite its “Avengers” pedigree.

In fact, I’d say it’s the best Hank Pym book since way, way back when Roger Stern court-martialed Pym in the pages of The Avengers back in the 1980s.

In a rare DC work, Dan Slott tells a villaincentric story that’s creepy and dark. This level of intensity is also unusual for Slott, whose work is generally more whimsical and light-hearted, but it works very well. The fact that Ryan Sook is on the art makes this series work as well—arguably, even more than the writing. But as discussed later in this article, one of Slott’s gifts is how well he works in the comic book medium, one which requires that a story be told with both words and pictures—not one or the other.

John Byrne’s solo Thing book was the best depiction of the character ever, but Dan Slott’s cancelled-after-eight-issues book was a close second. In a lot of ways, his work on Thing was similar to his later work on She Hulk: He took a character generally written in a very generic, bland way and gave him a heart. It also presaged Slott’s “big time” arc in Spider-Man, in the sense that Ben Grimm was newly rich and digging

the freedom (and toys) that come with wealth. Overall, the series was good but not “top 10” good. But the last issue, in which Thing hosts a poker party that he eventually closes early so he can get laid, is funny, charming, surprising, and full of great character moments. All the (ahem) “things” a great solo book should be.

Kids’ books aren’t usually my thing, but Dan Slott’s work on R&S comics was really great. Plus, in this one we get to see Spider-Man and Powdered Toast Man. Truly hilarious.

A very odd mini about the Great Lakes Avengers, a b-list team that included Squirrel Girl and Grasshopper, and in which Slott killed one team member in every issue. One of the first victims was a new character, Grasshopper, who died in the very panel in which he was introduced—in the proud tradition of the X-Men’s Thunderbird—making him an Avenger for less than ten seconds. Although the book was clearly a poke at Bendis’ Avengers: Disassembled story that killed off volume one of that team’s book for good, the comic can also stand on its own. It also set the tone for future GLA one-shots and appearances, because every time to read a GLA book you know someone is going to die. And it’s usually Grasshopper. 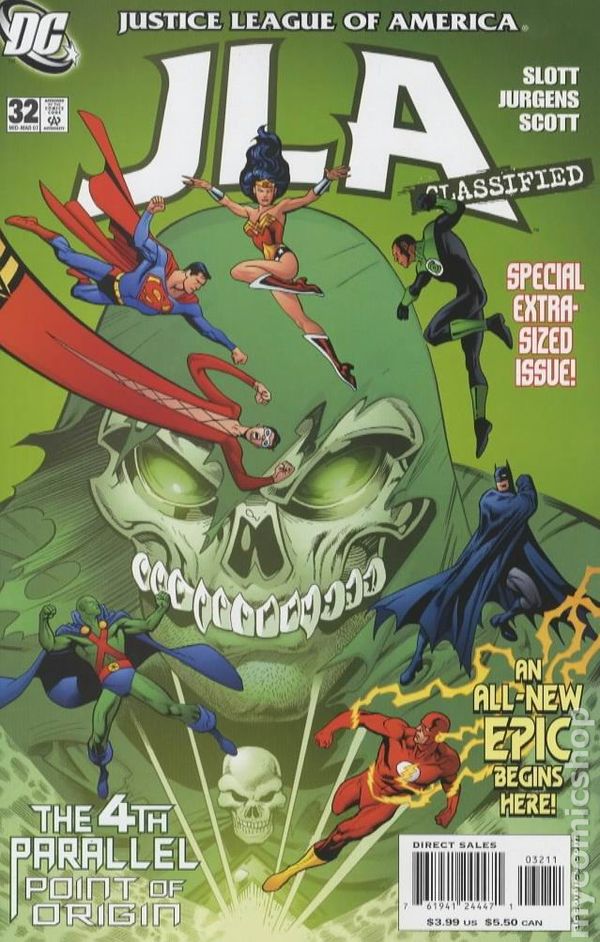 JLA Classified was almost an anthology title: Different creators would sign on for story arcs, like Grant Morrison and Greg Rucka, that told different, often edgier stories than what you’d find in the Justice League’s main book. For his arc, with art by Dan Jurgens and Kevin Nowlan, The Red King (a character Slott created) created parallel universes in which he’d do things like conquer the stock market and then take the gains from that universe back into the main DCU. Of course, he ends up trying to kill the JLA, leading to a great series of stories that could be as weird or death-filled as Slott wanted—much like GLA.

4. Spider-Man/Human Torch #1-5
A 5-issue mini from 2005 in which Dan slott, with tremendous art by Ty Templeton, uses Human Torch’s “death” as an excuse for Spider-Man to reminisce (i.e., retcon) about the various times the two partnered up throughout established (and non-established) issues of Fantastic Four and Amazing Spider-Man. Similar to Untold Stories of Spider-Man in the way it serves as a “gap-filler/expander” as much as a book that revises classic Marvel history. It’s also a great example of a book that is appropriate—and enjoyable—by all ages.

In which Jennifer Walters, attorney to the superhero stars, helps Spider-Man sue J. Jonah Jameson for libel. One of the things I loved so much about Slott’s She-Hulk run was how he integrated her secret- and super-identities. No, he wasn’t the first writer to do it, but he was one of the first to do it in a way that made complete and total sense. This wasn’t Tony Stark lifting his helmet and making a proclamation, but then mostly having his armored battles separate from his corporate undertakings. This was a lawyer who used her super-experiences to inform her legal tactics and decisionmaking. Also, Spider-Man says the reason JJJ is a hater is because “I am black.” So, that’s hilarious.
Another reason his She-Hulk was so great: The Awesome Andy reboot. 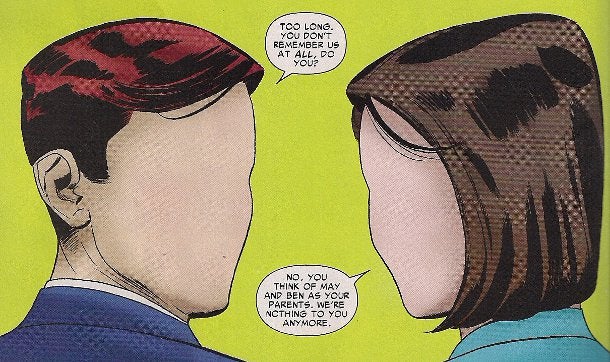 Dan Slott’s “No One Dies” arc is a wrenching examination of death, guilt and duty.

In which Spidey, following a story in which Marla Jameson is killed, laments over the many deaths he’s had to go through, and ends up resolving that no one will ever die again on his watch. It’s a natural evolution of his personality and “responsibility” mantra, but Slott’s character work (along with Peter David and other writers involved in the “One More Day” era) is so gradual that the pronouncement didn’t even seem dramatic when it first came out. It wasn’t until we realized what this meant, and how unrealistic it was for Peter Parker to make this pronouncement, that we as readers began to see the effect on his psyche—all the way up to the time of his own “death” in Amazing Spider-Man #700.

This book succeeds also in large part because of Marcos Martin’s art. But part of Slott’s talent is in his ability to work with such a magnificent storytelling artist. A comic writer has to be aware that he is a partner with the pictures—and many don’t. Even great ones like Brian Michael Bendis often crowd pages with words when the pictures should be telling part of the story. So the fact that there are many pages and sequences, particularly in #655, that are without words should not detract from making this book one of Dan Slott’s top ten.

I boycotted Superior Spider-Man before it came out. Then my oldest son, who has read every single Amazing Spider-Man ever published, begged me to get it. So I did. And man was it good. This is the arc that killed Spider-Man and ended Marvel’s longest-running comic book in history. Yes, we know Peter will be back, but in the meantime, it’s a blast seeing the Otto Octavious chaotic-good version of the character, from his creepy/slimey date rape of Mary Jane Watson to his smarter, automated approach to superheroics. It’s safe to say no one has ever done anything like this before to Spidey, or to any massively popular hero: It’s a complete change and break from the past, but, at the same time, it fits neatly in continuity and makes no effort to conceal that fact that Peter Parker is (literally) waiting for the chance to return. It’s like when Ed Brubaker killed Steve Rogers: Everyone was upset and wanted him back, but by the time Steve returned nobody wanted Bucky to give back the shield. I haven’t looked forward to a “next issue” as much as I do with Superior Spider-Man in a very long time.