Henry Peter Gyrich–the plaid-wearing special agent of the NSC–first appearend in Avengers #165, but all he does there is show his ID and walk around for three panels looking important.  This is the first time he meets The Avengers.  Fans of this era remember him well as the first pain-in-the-ass superhero cop to grace the cover of an issue (#211, one of the best issues of all time).  He got them to change their lineups, hire black folks (you’ll see that soon), and generally provided a great Colonel Flag to the Avengers’ A-Team.

But we can’t just include ol’ Henry.  #168 is chapter two in the great Korvac Saga, and the action begins to kick into high gear…Including the seeds of the Marvel Civil War:

Think about it: The arguments are the same.  Iron Man is rich and does what he’s told, toes the line, and expects the same.  Cap is a selfless hero who believes that duty and honor should be its own reward. 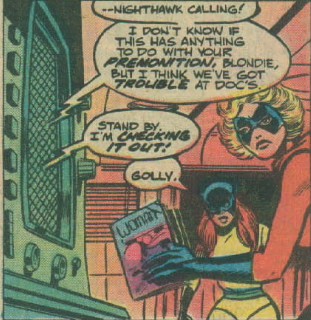